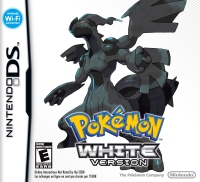 Pokemon Black/White is a Adventuring game available on the DS. It can be played in Singleplayer Competitive modes.

Pokemon Black/White is a Adventuring game. Adventure games are enjoyed for two reasons: they provide enemy encounters that require tactics and strategy to conquor, and they create a fantasy world in which to explore and adventure.

Pokemon Black/White can be played in a Singleplayer mode. Single Player Campaign games focus on one player's experience. Rather than collaborate with other players either locally or online, players progress alone. The campaign style of gameplay offers a connected series of challenges to play through. These chapters work together to tell a story through which players progress. Single player games are able to focus on one experience of a scenario, so that it is usually a richer, more visceral game.

Pokemon Black/White can be played in a Competitive mode. Competitive Multiplayer games provide experiences where players compete against each other and the computer. Obviously lending itself to sports and team games, these competitive engagements have also dominated the shooting and fighting genres because of the direct combat and expertise involved in each. Although these games were originally played in a split screen style, more recently they are played online via services such as PlayStation Network, Xbox Live and the Nintendo Wireless Connection.

Pokemon Black and White are set to kick off the fifth generation of Pokemon games with new mechanics, better graphics and over 150 new Pokemon to collect.

The latest adventure will take place in the New York-inspired Unova region, providing a change of pace from the Japanese-based settings of previous games. The protagonists are also a little older, as though the series is maturing slightly (ed: surely not, after all these years?).
read on...

Pokemon White/Black adds enough new Pokemon and modes to ease the series' monotony. Even without these additions though, a new Pokemon game to play with my friends is still an addictive proportion.

Through the years I have played various Pokemon games, from Sapphire on GBA to Diamond on Nintendo DS. Not surprising then that the storyline has grown rather repetitive. I started to grow bored of going to each city, doing gyms and so on with not much in between. So I was skeptical of how much this new game would capture me.
read on...

Pokemon Black/White: Gotta Catch 'Em All - An expose in a disturbing subculture among modern youth.

"A reporter goes undercover to witness street gangs, organised animal fights and capture of wild Pokemon" but discovers more than just a world of competition and collection.
read on...

Pokemon Black/White defies re-invention and proves to be a finely tuned, if slightly single-minded experience.

It's difficult to review a game like Pokemon Black/White. No matter how much time you spend on it, it always promises more: more creatures to find, more techniques to master, more side-games to provide entertaining diversion from the cycle of find/catch/train.
read on...