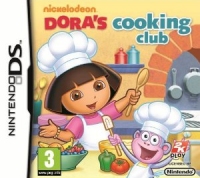 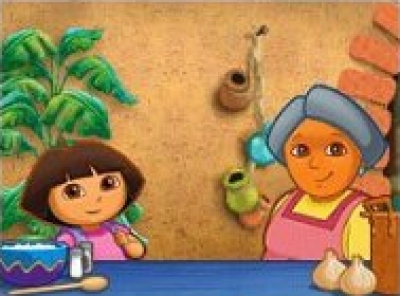 Dora's Cooking Club combines pre-school learn with simple cooking tasks in a well judged minigame collection. Intelligent design, like the save-anywhere system, makes this as much fun as it is educational for Junior gamers. Here's what the junior gamer in our house made of it...

Like I said on my Diego Mega Bloks (DS) review the other day, I'm a bit old for Diego and Dora but I still like to watch it with my little brother. When I do it reminds me of when I was really little, and I like that.

Having tried out the previous DS versions of the Diego and Dora games - Diego Dinosaur (DS) and Dora Princess (DS) - I thought this Dora game might be another short set of minigames. But actually it's a nice original game about cooking.

You have to try and cook different recipes a bit like the Cooking Mama (DS) games. But in this game you don't have the time limit which I like, because I always run out of time on Cooking Mama and that just isn't as much fun.

In Doras Cooking Club the different cooking tasks also teach you things about shapes and counting while you do them. It's more for younger kids - those at pre-school or early years like my brother - but I still had fun working through the recipes.

Each dish has about nine stages that involve chopping, spinning, grating and other tasks. You do each one with the stylus and the touch screen, but unlike Cooking Mama a simple touch in roughly the right area is enough to get it done.

If you stop in the middle of a recipe, when you come back you can carry on right from where you stopped.

For one of the dishes I to memorise different ingredients on the screen. Then, one of them was removed while I wasn't looking and I had to remember what was missing. This was actually harder than I expected. There was another where I had to fill a bowl with water using measuring cups, which was also quite tricky because you had to combine different sizes of cups.

I think there are around 30 different recipes to do - favourites so far have been pizza, enchiladas and fruit fiestas.

You can check how you are doing in the game on the tracking screen. This would be good when younger kids are playing it because their Mums and Dads can see where they are struggling.

I think it would be perfect for younger players. I'm going to get my brother to play it next.

One of the best thngs though was that if you stop in the middle of a recipe and turned the game off, when you come back you can carry on right from where you stopped. There are some more grownup games, like the Lego ones, that I think should do this.

Although because I'm eight Dora's Cooking Club was a little easy and I finished it quite quickly, I think it would be perfect for younger players. I'm going to get an brother to play it next.

You can support Ben by buying Dora's Cooking Club