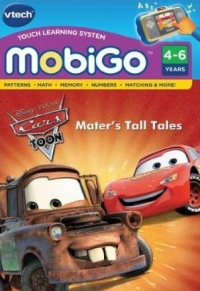 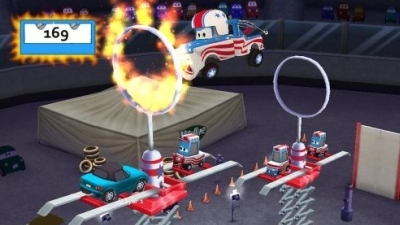 Meter's Tall Tales MobiGo is simple, educational fun. Better than this though, it lets the very youngest players join in with the Pixar videogame fun.

Me and my two brothers really loved the Cars film. But that was a long time ago, so it's good that they have made some new cartoon games for it.

When the film first came out we played the Cars (Wii) with Dad a lot. It was quite difficult with all the racing and exploring, but fun to play together as well. A year after that we got the Cars Race-o-rama (Wii) game which I was hoping would be easier, but was actually the same again.

I'd gone off Cars for a bit, until we got Mater's Tall Tales on DVD for Christmas. It's like the film, but in short episodes that last ten minutes each. What was better though was that Mater's Tall Tales (Wii) was much easier to play - like the DVD it was lots of short games rather than one long one.

The MobiGo version of Mater's Tall Tales is even simpler though, which is good for my younger brother who still had to just watch us play on the Wii. On the MobiGo game he can play along too. It has the same sort of games as the Wii version but they are simpler to control and use the touch screen.

Like the DVD, in the game Mater is hanging out with Lightning McQueen when he starts telling made up stories about his adventures. The games are all based on these funny stories.

It also teaches him counting and spelling while he plays because the games make him count or find the right letters to win. In Unidentified Flying Mater he has to match what the UFO's do in a game that's a bit like Simon Says but with the touch screen rather than your body.

On hard you have to play the game and match the right numbers and letters at the same time.

In Mater the Greater he pilots Mater through different rings, matching the right colours together and in Rescue Squad Mater he has to put fires out by tapping them in the right number order. I like helping him play El Materdor, which seems a little harder than the other games because you have to match the right symbols and also time when to let go of the screen to avoid being charged at by the bull.

He says his favourite is the Tokyo Mater game where you have to steer Mater through busy streets and match the numbers. I like this too because I play the Tokyo Mater (VReader) game sometimes as well.

Each of the games can be played on easy or hard. On easy mode you just have to get the right timing and tap the right things on the screen, without worrying about counting or letters. On hard you have to play the game and match the right numbers and letters at the same time.

Mater's Tall Tales on MobiGo is a little more difficult than some of the other MobiGo games he has. Unlike Tangles (MobiGo) that is for 3-5 years, this game gets you to move things around the screen and avoid being hit by stuff. Getting the timing right is a little trickier. It also includes more difficult counting and letter games. It says it is for 4-7 years on the box, which I think is about right.

You can support Ben by buying MobiGo Mater's Tall Tales