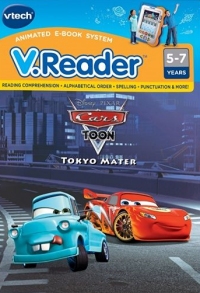 Tokyo Mater VReader turns one of Mater's made up stories into a real fairy tale. Although more of a book than a game, I enjoyed reading it though quite a few times.

My family have all really got into the Cars film. And have played most of the games that they released for it, on the Wii and the DS. This started when the film first came out, we played the Cars (Wii) with Dad a lot. It was a while ago so we mainly watched him play rather than do much ourselves - it was still fun though.

More recently we've all been playing Cars Race-o-rama (Wii) and have been able to join in more. But what I've enjoyed more is the Mater's Tall Tales DVD we got for Christmas. It's short stories that Mater makes up about his adventures. There's a Mater's Tall Tales (Wii) game that we've also been playing a bit as well. But I wanted something I could play on my own.

I tried Mater's Tall Tales (MobiGo) that my younger brother plays but it's a little too young for me now, I had soon finished all the games and there wasn't much to do after that.

Tokyo Mater on the Vtech VReader was much better for me. It's more of a short story than a game I guess. To get started you just pout the cartridge in and turn it on. Then you can tap the book picture to start the story.

On the story you have a few options. You can read along with the words as the story is read out loud to you, or you can pause it and repeat a page if you need to. You can also read it yourself from the words on the screen. This was best for me and I could tap words I didn't know to get the VReader to read them out to me. I also liked that I could tap on the pictures to make them move or make sounds.

I liked spending time in my room reading Tokyo Mater

There are some games too, a bit like the MobiGo version. But because you have read the story these can ask harder questions about what happens in it. The What Happened? game was my favourite, but I also liked Letter Merge and Special Sound.

The VReader game focuses on just one of the stories that Mater tells on the DVD rather than all of them like the MobiGo game. This means you get to hear more detail about this one story though. There is also a story dictionary where you can look up different words and characters to see a picture and description of what they mean. The story only lasts about ten minutes which is a bit of a shame, but with the games and different ways to read it I think I've played this for quite a few hours now.

I liked spending time in my room reading Tokyo Mater, it felt more relaxed than playing a DS game. I could use my imagination to fill in the gaps, or I could look things up in the dictionary mode. The game says 5-7 years on the box which is about right, although kids my age (7) will have seen it all pretty quickly. It depends if they like reading stories more times whether it's good value for them. For me it was good I think.

You can support Ben by buying VReader Tokyo Mater