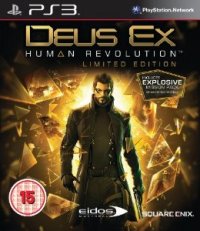 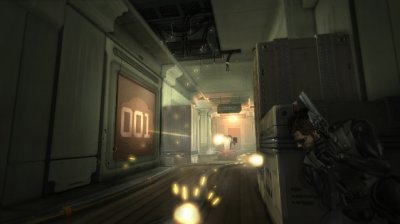 As with the films that have influenced it, Deus Ex's main strengths lie in its ability to craft a monumental story in an evocative world. The multi-faceted gameplay options and open ended narrative tracks only add to this masterful and very human videogame.

Everyone remembers the first time they saw Blade Runner. As well treating the senses it was a well paced, thoughtful and complex work of fiction. Its strong reliance on personal conflict and depth of character changed my perception of what science fiction could be.

The year is 2027 and human augmentation has become big business. You play as Ashley Jenson, the head of security for one of the major augmentation companies and it is your job to unravel a mystery behind who is launching devastating attacks against the industry. This will see you taking on gangs of human fundamentalists, rival companies and even factions within your own circle of influence to get to the truth.

It's a lofty premise, but luckily Deus Ex never veers too far into the techno-babble that has become so popular with science fiction games. As Jenson you have the ability to augment your abilities to fit the style of play you feel you are best suited to. Being none too confident with shooting I plumped for the more subtle and stealthy approach -- only waving my pistol about when it became absolutely necessary.

Choice and player discretion have become buzz words for videogames recently. Although real choice in gaming is impossible, Deus Ex still presents a multitude of viable options with which to undertake your task. It's only an illusion of freedom, but it's a good illusion.

Although these narrative tricks are rather straight forward Deus Ex comes alive as I stumbled upon opportunities for exploration in the vibrant depictions of Detroit and the fictional Chinese city of Hengsha.

Every aspect of the design is a precise piece of storytelling in its own right.

City streets drip with black rainwater and depression-era monologues reverberate down back alleys and noodle bars. I became an amalgamation of Philip Marlowe, Motoko Kusanagi and Harry Lime slinking from one gloomy crime scene to another.

Every aspect of the design is a precise piece of storytelling in its own right. The cramped stuffy living quarters on Hengsha show little regard to human expression or decency and the vast architecture of big business exemplifies humanity's lust for money and influence. Some individuals cling to existence by their fingertips while others can afford enhancements that allow them to squander all that God has given them. It's an intoxicating mix of ideals.

Getting lost in this fiction slowly becomes the most important part Deus Ex's story telling. The usual videogame storytelling devices like cut-scenes and newspapers and e-mails are complemented by the visual and audio design. This means the story, while being comprehensive and deep, doesn't lose the human story at its centre.

It is this human story I enjoy from videogames. When I watched Blade Runner for the first time I was confused. Why aren't the robots killing every one? Why does Harrison Ford have such a small gun? What's with that unicorn? It never struck me that you could tell a convincing story in a science fiction film.

Little did I know that Blade Runner would influence the way I viewed films for the rest of my life. I started to focus less on the pre-scripted story and more on the minor details. . I found myself doing the same thing playing Deus Ex.

It became an opportunity to exist in an environment that is as convincing as that film. It's one of the stand out moments in gaming for me. The Detroit of 2027 is a place I want to become immersed in and, however superficially, carve my own path through.

Deus Ex's decision not to sugar coat or simplify the complex issues surrounding human evolution is admirable. I detest having important plot points forced down my thought as if I were too stupid to understand what the developers were talking about. Give me a raw story as complex as it is dark and I'll be happy for hours.

Deus Ex balance straight up storytelling with the non-spoken tale told by its architecture, vast outdoor locations and internal spaces. The result is beautiful and moving. I only wish more science fiction films could find as deft a touch.

You can support Richard by buying Deus Ex: Human Revolution