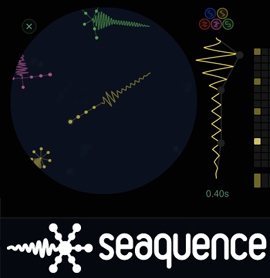 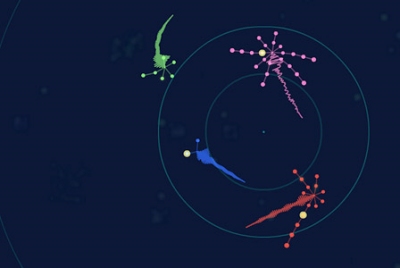 Seaquence not only lets you experiment with music, but you can do it visually. Its simple musical lifeforms are an easy way to learn transferable musical skills.

One of the things I like about video games the most, is the ideas that overspill in to reality. I'm not talking about people dressing up as characters from World of Warcraft and getting married or eight year olds running down the street pretending to Mario.

Every now and then something comes along and stops me in my tracks, musically and metaphorically. This happened the other day when I was emailed a link to the website by a friend in Florida who had been playing on it for some time. It was good annoyingly good.

My day job, if you like, is designing different way to get kids involved in music primarily digital music and this piece of software is great for that. So instead of being in a grump about how good it is, let me sing its praises.

Seaquence is a very simple, free to use sound design and sequencing software. Users simply can point and click on amoeba like creature to edit and sequence short loops of sound, they can add additional creatures to a Pool to create layers, and focus on an area using a microscope type view to change how all the sounds interact. It's like a more complex fully fledged version of Electroplankton on the DS.

The best part about the sound design is actually the visualisations of it. This is because it is this visualisation that controls the sounds, and it does it really well. Changing the visual layout of the little creatures has a direct and immediate impact on the sound. It is a wonderfully useful thing as it allows for immediate experimentation - which is essential for kids to learn.

He understood enough to transfer some of the skills to try out on a "real" synthesizer.

My son was a little bored, DS was on charge, it was Sunday so he needed something to entertain him, and he came into my lab. I showed him Seaquence and within minutes he was hooked, the direct correlation between graphics and sound allowed him to better understand the changes he was making.

He probably sat there for a good 45 minutes tinkering away, not only making different sounds but also making different shapes in the pattern box, drawing images to see how they would sound. What was really good was that he wanted to show me what he had done, he was proud of the sounds and patterns he had made and was clearly very confident to show them off.

He took a quick break to go get a sandwich and came back, while he ate his sandwich I showed him little keyboard I own - MicroKorg XL - and the software that come with it for editing sounds. I showed him how the same kinds of sounds could be made using a keyboard synthesizer and compared the two, after he had finished the sandwich he had a go on the MicroKorg to make sounds.

He has never done this before, keyboards were always my thing and he wasn't interested. But once he had played with Seaquence he had a way in - he understood and had experimented with it enough to transfer some of the skills and certainly the confidence to try out on a "real" synthesizer.

He liked the MicroKorg and he liked the sounds, but it wasn't Seaquence, he had to imagine more about what he was doing, how he was changing the sounds and I could see how that was effecting his experimentation. And then he asked one of the best questions I had heard in a long time "Why aren't all synthesizers like that" pointing to Seaquence. "I don't know, but I think they will be one day".

I whole heartedly believe that games in the broadest sense - and video games specifically - have a part to play in education.

I would strongly recommend checking out Seaquence but do it far away from anyone else, as although the loops can be wonderful for the person editing them, others might not find them so engaging, maybe use a good pair of headphones at a suitable volume. Is Seaquence a game? I am not sure it has rules it has consequences, it is play through learning and it's fun, so yeah I think it is.

I whole heartedly believe that games in the broadest sense - and video games specifically - have a part to play in education and it's these events, these little stories that interest me the most about video games and game culture. We play games but what do learn from them?

You can support Matthew by buying Seaquence