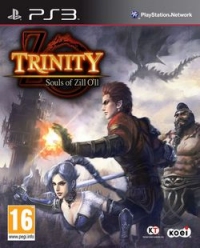 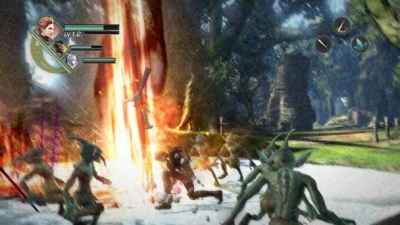 Trinity: Souls of Zill O'll is a solid blend of hack-n-slash and role-playing, but lacks vibrancy. It's a promising fairy tale which spreads its minimal story far too thin.

Trinity: Souls of Zill O'll sounds like someone tried to come up with a fantastical name, but choked on a sandwich part way through. Really not the most encouraging starting point, but I decided to give it a chance anyway. For a little while it even seemed like my time might be rewarded -- the opening scenes were surprisingly compelling.

The premise is a tragic fairy tale, where the emperor has been twisted by an evil sorcerer whispering prophecies in his ear. Hearing that he will die at the hands of his own grandchild, the emperor has his pregnant daughter killed before turning on his son. The prince falls, but naturally his illegitimate half-elf son Areus escapes to grow up plotting revenge.

This is a classic role-playing story set in a world full of battles and rivalries, from large-scale warring empires to everyday prejudices. Fairy tales can make great microcosms of the real world. Simple plots and fantastic themes leave these stories free to strongly emphasise their most important ideas. The result might be simplistic, but it's not without meaning.

The trouble is, a good fairy tale has to be able to work within narrow boundaries - and one of those is time. Trinity drags simple ideas out into a game spanning thirty hours or more, and there just isn't enough meat to sustain it.

The land of Vyashion is experienced primarily through maps and menus. Cities are just menus and checklists, with a lot of talking heads giving out quests or discussing local happenings. The microcosm feels abstract, without much sense of space or distance. Only smaller areas are properly generated for exploration and combat. They are well designed locations, but you'll probably revisit them a lot.

A good fairy tale has to be able to work within narrow boundaries - and one of those is time.

Dragon Age 2 recently had similar issues with reused locations, but partly made up for it with good writing. Here the side-quests are randomly generated, which says everything about how critical any of them are to the story (ed: not very?). There are several different quest types, but whether it's collecting an item or rescuing someone they all boil down to fighting through a bunch of critters and/or killing a mini-boss. Even the creatures lack diversity, with the same types of monsters fought over and over.

Building strength to seek revenge is really Areus' only motivation. He fights in the gladiatorial arena, and takes on repetitive quests for the adventurer's guild. That's all there is to it most of the time. The pacing crawls along, with big reveals anticipated many hours in advance. I hear the plot picks up significantly towards the end, but there's little incentive to get that far.

Trinity's world takes fantasy cliches to the next level. Elves are not just arrogant, but openly elitist and bigoted. Our half-elf hero makes a fine art out of being aloof and angsty. The dwarves, um, drink a lot and have impressive beards (sorry, I might have tuned out a bit there).

For a game so focused on the power of this Trinity it really likes to break up the group.

Initially Areus is bluntly unwilling to help people or work with others, but somehow ends up agreeing to it anyway. This sees him teamed up with the powerful fighter Dadga and agile rogue Selene. There's an obvious message here about friendship and not having to do everything alone, but for a game so focused on the power of this Trinity it really likes to break up the group. Each character has their own agenda, and will leave the party periodically to pursue their goals. Personal motivations make sense, but it feels disjointed and makes the difficulty erratic.

I don't hate Trinity: Souls of Zill O'll, but it's hard to find much to recommend about it either. It sits in the middle ground, where the microcosm is adequate but uninspired. If you're hunting for an action role-playing game on PS3 it might be worth a look, but this one's for genre fans only.

You can support Amber by buying Trinity: Souls of Zill O'll