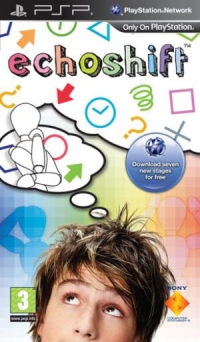 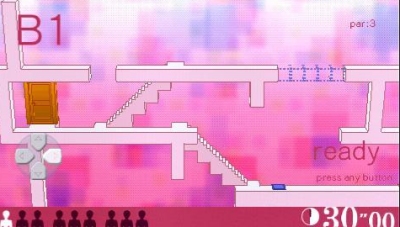 Echoshift PSP stylishly manipulates time, as it quietly and efficiently makes mincemeat of our linear thought. I think of it as being about the power of persistence, and that all our activities are built on previous experience.

Echoshift is a spin-off of the minimalist-looking Echochrome, which I also found fascinating. Where Echochrome utilised clever perspective-based puzzles, Echoshift is based on manipulating time instead of space. It retains the simple line drawings and mannequin figures, but adds a splash of colour and restrains the action to two dimensions.

One of the advantages of game worlds is the lack of permanence. When I make a mistake on a computer I am used to undoing it. I have developed this reflex so well, in fact, that sometimes I catch myself looking for the undo button in real life. Where is the reverse option for when I knock over a glass of water, I wonder?

Life's vital flaw is this lack of an easy reload or repeat. We have to make do with learning, and try to do better next time. Every action is developed over time, building on previous experience. Echoshift feels like a representation of this idea to me. It's a microcosm where previous actions are actually visible and can be tangibly worked with to solve problems.

In Echoshift, the aim is simply to reach the exit door. Levels can include pressure switches, timed gates, moving platforms, enemies and a range of other obstacles. It's usually impossible to reach the exit on a single attempt, which is where the time manipulation comes in.

Puzzles are solved using Casting, a concept which some may recognise from sections of Braid. Each mannequin cast in Echoshift roughly equates to a life. After the timer elapses, time Bounces; reversing you back to the beginning and spawning another cast.

It's a microcosm where previous actions are actually visible and can be tangibly worked with to solve problems.

As you start the level again, any previous casts simultaneously repeat their actions from previous attempts, allowing you to effectively be in multiple places at once. Timing is everything, allowing you to co-ordinate the actions of your cast members to co-operate effectively. Efficiency is also rewarded, with bonuses for completing levels using fewer casts.

As the levels become more complex, coordinating multiple casts can become very chaotic, and progress requires a fair amount of precision and clock-watching.

When I'm feeling properly switched on Echoshift makes me feel like a skilled conductor. When I'm not, the multiple versions of reality get out-of-step and progress towards the objective falls in a frustrating heap. This makes it a worthwhile handheld game for playing in short bursts when I feel like some mental exercise.

You can support Amber by buying Echoshift