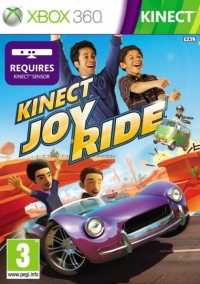 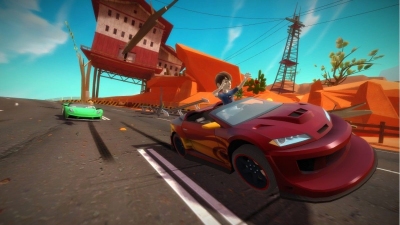 Joy Ride Kinect proves that air-steering works but suffers from too much driving assistance. Like many of the cars I review, Joy Ride is fun for a while but isn't a game you will want to live with.

Now, let's get one thing straight, despite my obvious motoring journalism leanings towards more serious racing games, I often play and enjoys non-realistic racers. Sure, they may not always adhere to the rules of physics, but that doesn't stop them being exceedingly good fun. Mario Kart, in its many incarnations, is a case in point.

Joy Ride threatened to stretch this theory to the extreme though, being a Kinect racing game you play with your hands in the air, standing in front of your TV.

First and foremost, Joy Ride feels a little bit sparse. There's a limited range of cars that ape well known models such as Volkswagen's iconic camper van and Ford's classic Mustang muscle-car but it seems like choice of car has a minimal affect on the racing. If you're looking for that sort of depth, look elsewhere.

The actual racing is hit and miss, in single player mode the controls work fairly well. It's a simple enough concept, the game controls your speed and braking and will take certain liberties in order to keep the action flowing.

Bringing the imaginary wheel closer to your chest and holding it before quickly pushing it away will give you a boost. It's a system that is entirely functional, but made me feel like I wasn't totally in control -- a sort of fly-by-wire sensation. This wasn't helped when I allowed the game to play itself and still finished a reasonable third.

You can also wiggle and dance around while negotiating jumps to make your avatar perform stunts and earn more fans (the game's currency). Earning fans means you can unlock more cars and car themes, should you feel so inclined.

Two-player mode was more awkward, despite playing in a large room; my gestures seemed to be lost as soon as a second player joined in. Try as I might I simply couldn't get my boost to charge and soon lost touch with the pack, and with my interest in the game.

The problem with Joy Ride is you feel so removed from the action. Now, being fair I don't expect it to offer the Forza-like detail, but it should at least be aiming for the likes of Mario Kart. And this is where the trouble with Kinect comes in. Because the game accelerates and brakes for you, that's two key components gone before you start. Adding in motion controls means that there's absolutely no way to judge or feel the car cornering.

The future for racing games and Kinect lies in more subtle use of the technology.

I'm used to offering balanced reviews of the road cars I test, finding the good in the rough, but here that is quite difficult. At times it felt more like a tech-demo than a full release, or maybe something you might download from Xbox Live Arcade for a few quid (Ed: Which is interesting as Joy Ride started life as a free to play XBLA download game). It's certainly not a full-price game and is not the best advert for Microsoft's rather cool and incredibly clever peripheral.

Rather like the Daihatsu Copen. Yes it's fun for brief moment, but you'll soon want to give it back and move onto something with a bit more substance. Of course in the right audience the Copen can actually come into its own, but for anyone serious about driving it's very limited. 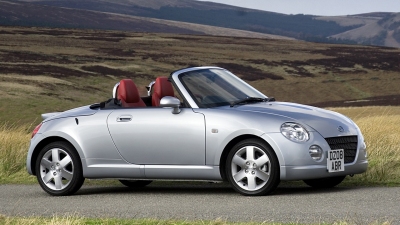 The future for racing games and Kinect lies in more subtle use of the technology, like the upcoming Forza Motorsport 4, that will use Kinect for head-tracking in races or allow you to look over the cars in its rather cool looking Autovista mode, but that's for another day.

While the kids will get a lot out of waving their arms about to steer, I think I'll stick to a tried and tested controller or wheel, if you don't mind.

You can support Adam by buying Joy Ride