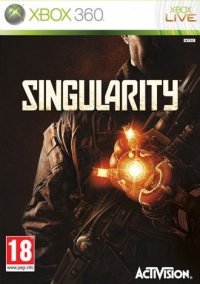 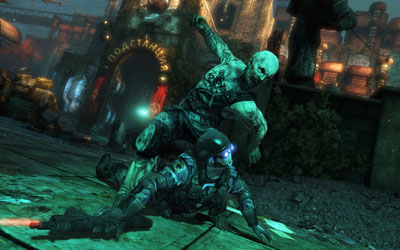 Singularity is good, but borrows too heavily from elsewhere. Echoes of Dead Space, BioShock and Half-life 2 leave a distinct feeling of deja vu. The moments that really stayed with me after playing were those that capitalised on its B-Movie storyline, adventurous gameplay and standout set-pieces.

In 1955, on a small island off the coast of Russia, Soviet scientists working to uncover the secrets of Element-99 accidentally cause a melt-down. There are devastatingly far reaching effects: E-99 has time-travelling properties, and the blast resonates in 2010, drawing American Recon Marine Nate Renko into a battle for survival against Soviet troops and various mutants in both time periods.

It's a cliche, but it's one told with enough conviction and atmosphere. There are plenty of twists and turns in the tale to keep things interesting, though due to the baffling lack of subtitles and the poor sound mix (dialogue is overwhelmed by everything else) I sometimes had to guess as to what was going on. Although I still felt invested by the end the lack of subtitles is unacceptable, they're the most basic of accessibility options that really should be standard.

The disparate story elements result in great variety throughout the game. I spent the early stages exploring the ruins of the research facility, utterly terrified as I was stalked by mutants and simultaneously haunted by the tragedy of my recent accident.

It's a sequence that stayed with me even after I stopped playing.

Later, gameplay is predominantly made up of more typical adrenaline pumping gunfights against Soviet troops, which I found rather less interesting, though I appreciated the healthy range of weapons. Neat touches - like the sniper rifle that can slow down time or the rifle that shoots round corners - keep the gunplay engaging.

There are several bosses, including teleporting mutants and giant insect-style monsters. These aren't too tough and add some memorable moments. While most of the standard levels are solid, if forgettable, the frigate stage really stands out.

Having been at the bottom of the sea for 55 years it's restored using the power of E-99, but rapidly degrades as you run through the corridors - rusting, bursting leaks and collapsing as you go. It's a sequence that stayed with me even after I stopped playing.

There's also a survival-horror vibe here which I liked, particularly in one sequence that involved moving stealthily past blind mutants. My biggest surprise though came from several environmental puzzles.

Singularity's ace in the hole is the Time Manipulation Device.

Most modern First Person Shooters patronise gamers, assuming they don't have the attention span to last two minutes without pulling the trigger. Singularity is full of areas that involve careful exploration: you must use the tools at hand to manipulate objects for your benefit. I was reminded, in the best possible way, of Half-life 2.

The game is also reminiscent of Dead Space with its weapon upgrade system, and a tool to project your path. There's even a bit of BioShock thrown in for good measure in the form of its Unreal-powered visualisation of a world that hasn't stood the test of time.

Singularity's ace in the hole is the Time Manipulation Device. The wrist-mounted gadget has numerous uses: the most important being the ability to age or renew objects and enemies. This can be used to solve puzzles, turn enemies to ash or even turn Soviet troops into mutants. Unfortunately, it doesn't really do enough to qualify as an innovation. It's certainly not as ground-breaking as Half-life 2's Gravity Gun, which is clearly an influence here.

One would expect Singularity to really work its way into your psyche.

By standing on the shoulders of giants, one would expect Singularity to really work its way into your psyche. Unfortunately though, it's merely content with re-treading a similar path.

I still found it a hugely entertaining experience, even if I didn't know what was going on much of the time. I liked the fusion of old school, explorative first-person gaming with more modern ADHD shooting galleries, as well as the survival-horror elements. Somehow these very different elements, that could easily contradict each other, work comfortably together and because of this offer plenty of enjoyment.

You can support Tom by buying Singularity