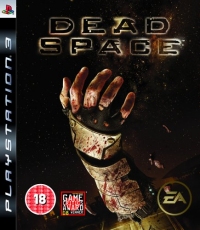 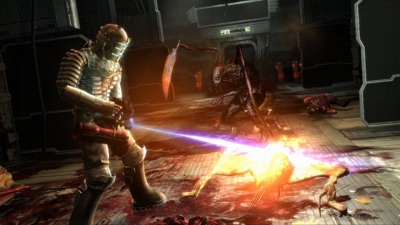 Dead Space borrows classic horror movie elements, but its clever approach to interface and the lack of cut scenes create something far more immersive, intense and, ultimately, scary. Whereas in horror movies we share the nightmare, in Dead Space we live it.

Isaac Clarke is our hero and avatar throughout Dead Space. He's part of a repair team dispatched to the USG Ishimura, a Planet Cracker (apparently, the best way to mine a planet's resources is to take it apart first), which has been out of contact for some time. What they find on board is far worse than the expected broken satellite relay.

While mining the planet, the Ishimura's crew have uncovered a Marker, a religious icon that causes those around it to go violently insane. Further, the corpses return to life and rapidly mutate -- this is virtually every horror monster in one, including zombies, mutated humans and aliens. Nearly every crew member is dead, and the Ishimura is full of these Necromorphs when Isaac's ship crash lands in the hangar.

The feeling of safety never reappears.

From the very beginning we share Isaac's perspective, and never leave it. Most games further the story with cut scenes. But I find, when a cut scene starts, and I put my controller down I lose my connection with the game. With no cut scenes in Dead Space, I was constantly immersed.

Similarly, there is no obvious interface. Where we would normally be privy to health bars and ammo meters plastered across the screen, in Dead Space this is incorporated into the game. The ammo meter sits on the gun, where Isaac himself would see it. The health bar runs along Isaac's spine. The map, inventory, objectives, logs and incoming video messages are all projected just in front of Isaac when prompted, through his suit. With no distracting heads-up display between the player and the game world, Dead Space is significantly more immersive than other examples.

Visceral Games have demonstrated a good knowledge of horror movies and games. They know that suspense is key to the scare, and they know that modern audiences, who have grown up watching films like Halloween, know what to expect.

On more than one occasion, I had the rug pulled from under me. Making my way slowly down a corridor, for example, I expect a Necromorph to attack me any second. That attack never comes -- the suspense builds and builds. I enter a safe area, a large room with a store, a workbench and a save point -- an area never formally designated safe, but safe by assumption and experience. In here, I'm sure I'm safe.

Just as I'm using the store to purchase some new ammo, I'm jumped by a Necromorph. The unspent suspense from before erupts as I jump several inches out of my chair. My heart pounds and hands shake, as I fight off the monster, run into a corner so I won't be surrounded, and wait until it appears clear. The feeling of safety never reappears.

Horror movies often externalise a common fear, both for consideration and exploitation.

Perhaps the game is relentlessly intense. Many gamers have complained that they could only play in short bursts (it took me nearly three years to finish it). This disrupts the immersion, and underlines a major difference between games and movies. Movies are designed to be watched uninterrupted, whereas games are far longer so they must be interrupted. Dead Space negotiates these breaks in the experience well - it's never long before the sense of immersion (and dread) return when you pick up the controller for your next session.

Partly responsible for the pervasive sense of dread was the USG Ishimura itself, which reminded me of the Nostromo in Alien. The ship feels real and man-made, not sterile like many space vessels. The Ishimura features corridors and rooms that are functional, and in many ways resemble a contemporary factory. The bowels of the ship, all giant engines and hazardous jets of fire are industrial nightmare incarnate.

Horror movies often externalise a common fear, both for consideration and exploitation. The best example probably remains Alien, where the titular creature (many say) represents man's fear of birth. It's no coincidence that it's a man who is impregnated, and there are frequent references to birth and motherhood throughout the film (and, indeed, it's sequels).

Dead Space utilises the simple and universal fear of death, and what happens next. While zombie movies have arguably covered this before, Dead Space takes it one step further with its use of a fictionalised religion called Unitology, a theology of transformation and rebirth. These concepts are familiar to most contemporary religions in one form or another, and Dead Space perverts these ideas to terrifying effect.

As humans, we are aware and scared of the weaknesses of our physical bodies.

The horrific forms of the Necromorphs play into fears of disfiguration, too: as humans, we are aware and scared of the weaknesses of our physical bodies, but are also curious. Horror movies have relied on this contradiction for decades, particularly in recent years with modern gore-fests such as the Saw franchise.

Dead Space is a nightmarish experience, one that I hesitate to say I enjoyed. It was extremely intense, which I found distinctly uncomfortable, yet I kept coming back to it, despite it ending up being such a disjointed experience. Overall, though, it's a high quality game that plays with expectations to deliver something a little off-kilter but completely essential.

You can support Tom by buying Dead Space