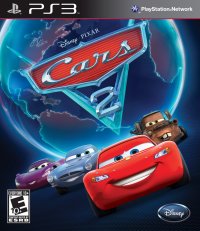 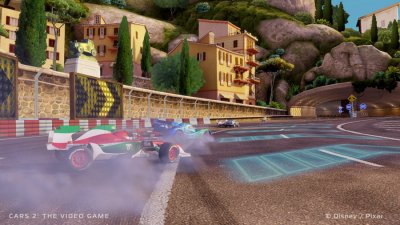 Cars 2 feels every bit like taking part in the fun and mayhem of the movie, with a wealth of options and great 4-player racing.

Having had the chance to play Cars 2 briefly earlier in the year (see Cars 2 (PS3)), I was very curious to see if the full game could make the same impression on me. When I got my mitts on it I had some friends coming over to whom the promise of some Disney-Pixar racing seemed too good to be true, so they brought over some additional PS3 controllers and we got the chance to put the 4-player through its paces.

I'm not sure if playing it for the first time with friends is the best approach or not. One of the most impressive things about Cars 2 is that there is little distinction between singleplayer and multiplayer content. In practice, this means that all four of us had to endure a series of tutorials and basic races before the rest of the game's content was unlocked. Still, at the very least it saved me explaining the controls and provided a level playing field for us all in coming to the game.

It's good, cheerful, boisterous fun. All of us appreciated that the car handling is a bit more solid and racing-like than a kart racer like Mario Kart, but the bouncy physics and exaggerated weapons keep the game from becoming too serious. It's probably somewhere between Mario Kart and Blur. The downside was that, even playing it for a while we didn't seem to unlock very much content and we had to make do with only a few tracks. It was only when playing it later in single player that I discovered how to unlock more content. Perhaps this is a game in which the singleplayer needs to be attended to in order to unlock all the cars and tracks?

I got very close to a barrier and my car put a wheel up on the side as if reaching out an arm for steadiness.

The quality of animation among the car characters is flawless. They seem every bit like the characters from the film, even when racing. The cars spout lines from the movies as they are performing stunts and there is a huge amount of expression in the movement; there was a nice moment during one race when I got very close to a barrier and my car put a wheel up on the side as if reaching out an arm for steadiness.

Playing Cars 2 on my own was a very different experience. In playing with friends, my focus is on the fun we have together and who - out of the four of us - comes first. In singleplayer my attention was shifted to winning outright and it was only then I noticed the challenge the game provides. The computer-controlled characters actually put up a pretty stiff competition. In a game aimed at younger players as this is, I would normally expect to sail through the first two classes, claiming gold medals first time out. Actually I found enough of a challenge here that many tracks I had to make a few attempts at in order to win gold.

Sometimes the weapons feel unbalanced, but this is actually down to a lack of spatial awareness afforded by the game. There are lock-on weapons which appear impossible to shake and in our four-player game we complained that these were arbitrary and irritating. I discovered later that it is possible to transfer the weapon lock to another player by barging - turning these into a wonderful opportunity for an impromptu game of Tag. However where the game falls down is that unlike other driving sims and kart racers there is very little information about the position of the other cars in relation to the player. Because the racing is comparatively realistic and challenging there tend to be short times between each player, meaning that a hit can reduce a player by many places, even from 1st to last place in a single hit. This can be highly frustrating.

It feels like the biggest omission is the lack of online multiplayer. The developers claim it to be a deliberate choice, to prevent younger players from abuse online. However, this overlooks the use of a console's parental lock features or even the work of Cars 2's own online portal which provides chat facilities. To leave out online multiplayer for a game like this is a travesty, particularly when some of the game's modes are multiplayer only.

It's the lack of online multiplayer that keeps Cars 2 from being one of my all-time favourite racing games.

As a side-serving, the official website (World of Cars) features an entertaining social hub and mini-games in an open-world environment based on Radiator Springs. It can be linked to the console game to unlock various in-game rewards. It's very well presented, but compares poorly to the Cars 2 game itself. Ironically, the Cars 2 online website (which can be linked to the game to unlock content) does feature multiplayer online racing but I found that there were very few other players online and I struggled to get a game. It's free to register but, like so many social gaming sites, much of the content is locked away unless regular membership is paid.

Overall, Cars 2 is a fantastic game that players of all ages can enjoy together, especially families. For me it's the lack of online multiplayer that keeps Cars 2 from being one of my all-time favourite racing games. But, if you have lots of gamers in your house - or even regular visitors who'll turn up with a pad - Cars 2 is one of the most fun multiplayer games around.


You can support Chris by buying Cars 2