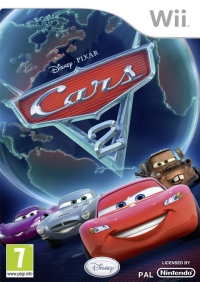 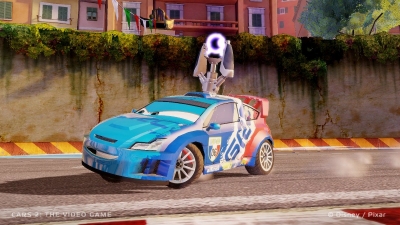 Cars 2 Wii delivers what Blur promised and beats MarioKart at its own game. What might have been a boring movie spin-off turns out to be one of the best kart racers I've played for a long time.

I really enjoyed playing Toy Story 3 on the Wii with my friends last year. Something about it made it stand out from all the other cash-in movie spin off games that we usually avoid. Mainly this was because it was a great game in its own right rather than relying on the movie characters to pull it through.

I've not seen Cars 2 yet, but when I realised it was developed by the same people (Disney and Avalanche Software so my more geeky mates tell me) I was really up for giving it a go.

If, like me, you've not seen the film yet the basic plot is that Lightning McQueen has to travel the world to race in the Grand Prix, while trying to get to the bottom of something a little fishy. It's nice to know a bit of the back story but really you don't have to know this to enjoy the game.

Now, if you mention Mario Kart to some of my friends they get this dreamy look on their faces and start spouting off about how amazing it is, and want to go straight off to play it. Good news for them (although a little annoying for the rest of us) is that Cars 2 is a lot like Mario Kart. The best news though is that it is actually just as much fun as Nintendo's own kart racer - with all the fun of the Pixar cars added into the mix.

This is a lot like what Activision were trying to do with Blur - combine a more serious looking game with the fun of a kart racer. While Blur often seemed to be undecided about whether it was a hardcore racing game or a family fun-time experience, Cars 2 Wii gets the balance just right and really does beat Mario Kart at its own game.

Where it doesn't quite measure up is on the single player. It's just a little boring racing against the computer and there is too much repetition. If I'm honest though, I very rarely play racing games on my own, even when I want to it's not long before one of the gang muscles in on the action.

They get this dreamy look on their faces and start spouting off about how amazing it is.

The multiplayer in Cars 2 is great. First off you can join or leave the game whenever you want, and play with up to four other people in the split screen mode. Then there are a host of different weapons - think machine guns and rocket launchers rather than shells and bananas here - and some great game modes -- arena hunting, team games, capture the flag and straight up races.

Like Mariokart though, what sounds like a pretty simple kid's game actually has a hard core game under the hood. As well as mastering the weapons you can also pull of special tricks (flips and spins, driving on two wheels, and driving backwards) that build your boost meter. You can then use this boost to side-swipe opponents off the track or increase your speed.

It all looks very nice as well, even on the Wii. I was impressed with Toy Story 3 on the Wii because it matched the 360 and PS3 versions exactly - rather than being a dumbed down simple version. The same is true here, with all the modes and visuals that are usually reserved for the more powerful consoles.

This does mean that things slow down a little from time to time (again Mario Kart has the edge on it here) and there's not quite as much sparkle as on the bigger consoles, but this seems like a compromise worth making.

Cars 2 is a much better game than it has any right to be.

I was less impressed with the controls though. There is a combination of Nun-chuck steering and waggling with the Wii-mote that makes things a little inaccurate at times. I ended up plugging in a Classic controller while my friends dug out their GameCube controllers to get some more accurate controls. This is actually a testament to how good the game is to play, that we needed that level of control to get the most out of it.

The only other negative is that there is no online play on the Wii version. I don't mind this myself - I usually play with whoever's in the house at the time, but I know my sister likes to play online with her boyfriend when he's not over and she'll be moaning about this when she realises she can't.

Cars 2 is a much better game than it has any right to be. By taking time over the gameplay, rather than worrying about a complex story, the developers have created an experience that would be fun with or without the movie tie-in.

You can support Rowan by buying Cars 2