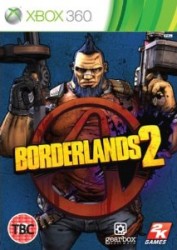 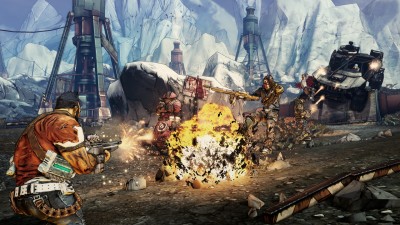 Borderlands 2 has been released on 360 and been provided for us to preview/review by the publisher.

"Borderlands 2 360 is a pretty much perfect sequel, a whole world packed with funny, violent adventures to have alone or with friends..."
- Story Gamer (Mon, 26 Nov 2012)

Borderlands 2 sees a multiplatform return to the bright and violent world of Pandora with a cast of new characters and a box of new tricks.

The original Borderlands shunned the realism of other squad shooters with a distinctive cel-shaded style and over-the-top weapons and effects. Combining the immediacy of a firstperson shooter with the dungeon-crawling play style of a roleplaying game earned it an enthusiastic audience and spawned four add-on packs.

Borderlands 2 will be the true sequel and the game has built upon its style with more detail to each area. Weapon modifications have been expanded with many more customisable options. Also making an expanded return is the character skill trees which allow you to make your character develop to your own taste.

The characters and environments in Borderlands 2 are all fresh and even include a new character who can wield two weapons simultaneously to deliver maximum mayhem.

Borderlands 2 is currently planned for release on Playstation 3, Xbox 360 and Windows PC and is currently awaiting a confirmed release date.


You can support Paul by buying Borderlands 2