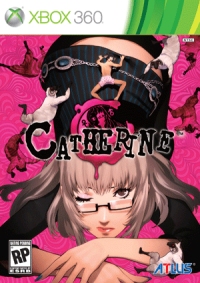 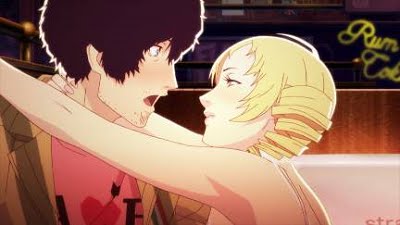 Catherine has been released on 360 and been provided for us to preview/review by the publisher.

"Catherine terrifies me, for what it says about me. The supposedly nightmarish images it conjures up pale alongside the way it reflects my decisions back at me -- ultimately making me question my real life choices. .."
- Scared Gamer (Sun, 22 Apr 2012)

Catherine is a platform puzzle game coming from developer Atlus. But adult themes, many of which are manifested through nightmarish imagery during twisted dream sequences, it could appeal to a mature audience for reasons beyond that of its game play.

Catherine has very basic underlying game play concept; manipulate blocks to help you assent your way through level. But this description does little to prepare for the game's real hooks of an adult themed story and a style guaranteed to attract Japanophiles.

Catherine's unusual aesthetic is a necessary one, and a great many of the game's themes (while sexual in nature) stem from many issues currently plaguing twenty-five to forty year olds in modern Japanese society.

Taking control of Vincent you are a young man who enjoys his uncommitted, party filled life. His lover of five years (Katherine) is pushing for marriage, a common occurrence in Japan where being over thirty and not married is still socially stigmatised for women.

Sat in his local bar, the Stray Sheep, Vincent in contemplating this situation when woman comes in and sits beside him. This new lady, Catherine, is his type and, after spending the night with her, he begins having a series of bizarre dreams, which (due to series of unexplained deaths in his area) he believes will kill him (ed: sounds like Neighbours to me).

These dreams are where the gameplay happens. In each he moves blocks and navigates puzzles as quickly as possible to beat other men (who appear as sheep) to the summit, where he faces a boss. Every part of the dream ties back to Vincent's struggles, with societal pressures and emerging situations around him manifesting in a range of disturbing imagery.

Cultural differences, box art that seems to be aimed at schoolboys and the strange decision to base the game in the US rather than Japan may put off many of the people who would enjoy Catherine's puzzle gameplay.

Catherine will be coming to PS3 and 360 in the US this July with currently no fixed date for a European release.


You can support Paul by buying Catherine