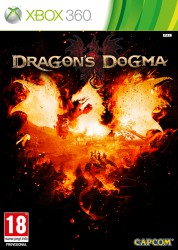 Dragon's Dogma is a new roleplaying adventure from Capcom. It enables you to train and trade AI team-mates and feels a little bit like Pokemon for grown-ups.

Dragon's Dogma is an open-world fantasy roleplaying game which doesn't provide any immediate multiplayer co-op. Instead it provides a range of automated teammates who can accompany you on your adventure. The hook here is that they are learning characters, who will adapt to your play style and learn how to fight in particular circumstances, making them more valuable for certain kinds of encounters. However, should you find that you need a different kind of buddy to tackle a particular quest, Dragon's Dogma will allow you to trade team-mates with other friends via Xbox live and PSN. These characters then become almost like human Pokemon, trained to battle in a particular way.

The game is designed to bring a more action perspective to fantasy battling, with the ability to grab on to enemies and use this to your advantage. For larger enemies, you will be able to climb them (in a manner similar to Shadow of the Colossus) to inflict more damage on specific parts of the body.

Dragon's Dogma looks to be pretty standard fare when it comes to open world roleplaying. However, to sweeten the appeal of this game in the face of massive competition in the fantasy RPG space this year, new copies of Dragon's Dogma will provide a code for downloading the demo of Resident Evil 6 early. For the Xbox 360 version, this will be an extremely early look at Resi 6 as the demo will be available from July 3. The PlayStation 3 demo of Resident Evil 6 will be available to Dragon's Dogma owners from September 5, ahead of that game's release on November 20th.

Furthermore, this game is promised some longevity with DLC planned for the future, which will include additional quests as well as weapon and armour upgrades. All things considered it may not immediately grab attention, but it has enough unique features to make me want to see more when it is released.

Dragon's Dogma is currently planned for release on the Xbox 360 and Playstation 3 on the 25th of May 2012.


You can support Paul by buying Dragon's Dogma