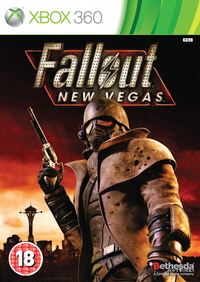 Other GamePeople columnists have reviewed this from their perspective - huh?:
Considered Gamer (360)
Dressup Gamer (360) 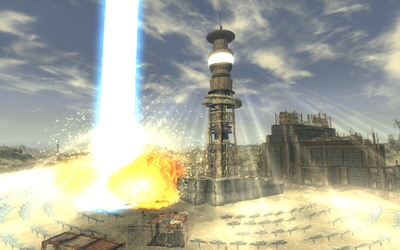 Fallout: New Vegas has been released on 360 and been provided for us to preview/review by the publisher.

"Fallout New Vegas offers everyone something different and doesn't lend itself to easy consideration. Dark humour mingles with freedom and consequences that play in the expanses of its world to create a real sense of significance. There is so much going on here, it took me a long time to make any sort of meaningful sense of the cacophony..."
- Considered Gamer (Tue, 09 Nov 2010)

"Fallout: New Vegas 360 isn't only about swooning fans, its new setting also adds considerably to the fiction. Full of interesting characters, locations and most importantly decisions, this is the richest of gaming experiences for those that like to role play..."
- Dressup Gamer (Wed, 27 Oct 2010)

Fallout New Vegas offers realistic role play for hard core fans, and more adventuring for the rest of us. Back in the hands of the series' original developers, a whole new world is waiting to be discovered on 360, PS3 and PC.

Fallout: New Vegas is the next game in the Fallout series, although not a direct sequel to the 2008 Fallout 3. Using the same engine, it moves its role playing game mechanics to Vegas. Not Vegas as we know it, but a new Vegas, which has been spared the nuclear fires that engulfed the rest of the world and been frozen in a 1950's imagining of the perfect future.

Amongst the more interesting features of Fallout: New Vegas is Hardcore mode, which attempts to make things very real for anyone trying to survive in the Mojave Desert. This can be switched on at any time and requires you to stay hydrated and get sufficient sleep or you will start to lose health. It also gives ammo more importance, doesn't let you heal broken bones without a doctor and doesn't instantly heal you with an applied Stimpack. All of these changes mean that for those that want it, Fallout New Vega will be more of a role play experience.

The other exciting thing about New Vegas is the fact that its being developed by Obsidian, which was formed out of Black Isle Studios, who worked on the original Fallout games. Hints have been dropped regarding the cameo return of characters from those original games and the reappearance of the New California Republic.

Announced just yesterday was the confirmation of DLC, which is welcome if not entirely unpredictable. Fallout 3 had some of the best downloadable content of any game, providing many more hours of adventure and stretching the experience well into 2009. The fact that it will be a timed exclusive for Xbox 360 is sure to annoy PS3 owners, who will presumably have to wait for the inevitable disc based release.

Fallout: New Vegas will be released for PC, PlayStation 3 and Xbox 360 on 22nd October.

You can support Paul by buying Fallout: New Vegas