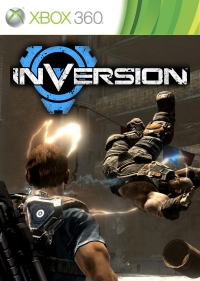 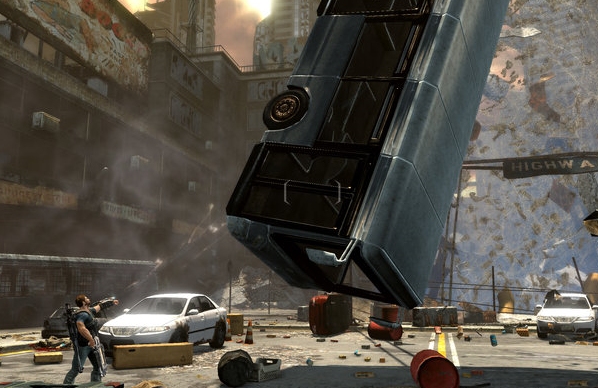 Inversion 360 has so far failed to distinguish itself from other futuristic third person shooters, and will need a lot more work to feel like anything more than just another Gears clone.

Inversion was playable in a darkened corner of the Eurogamer Expo show floor, tucked rather forlornly behind the giant section devoted to this year's Call of Duty. Sadly, a quick hands-on with the title revealed little to justify any more attention.

Inversion is a futuristic third person shooter where the player is channeled through the environment until they hit a more open area, usually spotted with chunks of convenient cover, where a shoot-out can take place.

In other words, it's Gears of War, or rather one of the many such games trying to follow in that series' clompy footsteps.

Unfortunately playing through a section compounded the sense of familiarity rather than alleviating it. In spite of the potential interest of the gravity mechanic, the section I played was very standard running and gunning, with the gravlink failing to distinguish itself from similar gravity toys in numerous other games.

It could be an unfortunate slice of gameplay to demo, or just that Inversion requires a lot more pre-release polish, but at this stage the game feels like a poor substitute for more prominent SF shooters.

Inversion 360 aims to add an extra dimension to third person shooters with gravity-bending game mechanics that turn environments around and allow for large scale, destructive action.

The story premise of Inversion is conventional enough: in the near future, cop Davis Russel finds himself fighting alien invaders who have landed on Earth. As a third person shooter, Inversion offers co-op play in the mould of genre-leader Gears of War, with a second player taking the role of Davis' partner Leo Delgado.

So far, so straightforward.

Inversion's twist is that Davis's home city has been changed by the arrival of the aliens, gravitational anomalies causing patches of weightlessness and also 'vector shifts', where gravity works in a different direction in different places: in other words, Davis can find himself or his enemies running up the walls or dancing - OK, more likely standing - on the ceiling.

These gravitational tricks can be used to strategic advantage, with the different patches of gravity pulling objects towards them, but the game also provides a more hands-on way of manipulating gravity. A gravlink device can be used to increase or decrease the amount of gravity working on an object, as well as move them around in a more conventional manner.

Throwing around the forces of gravity should lead to some heavy duty destruction, and Namco Bandai is touting Inversion's use of Havok Destruction for 'maximum destructibility' in the environments.

Initial trailers make great play of the shifting gravity concept, with alien hordes charging up the side of a skyscraper to attack Davis and Leo, who lean over the roof edge to fire down on their attackers.

It all looks pretty impressive in the trailer, but at this stage it's hard to tell whether the use of gravity in the finished game will be a compelling innovation or just a gimmick.


You can support Paul by buying Inversion