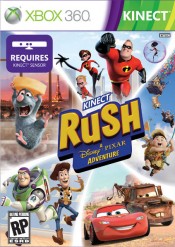 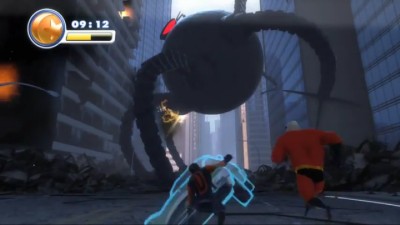 Kinect Rush: A Disney Pixar Adventure has been released on Kinect and been provided for us to preview/review by the publisher.

Kinect Rush extends the Disneyland Adventures experience by scanning the player into the game using the Kinect camera.

While motion controlled games have been seen on Nintendo Wii and PlayStation Move games, Kinect's ability to identify clothing and body/head shape in the game is unique to Microsoft's controller.

As the Kinect controller extends its functionality and in-game uses it will be interested to see what Nintendo and Sony can bring to the table to keep up. In that light the Wii U and Vita/PS3 combination have their work cut out -- particularly if Microsoft announce the next Xbox console (that potentially also extends Kinect) at E3 in June.

Kinect Rush: A Disney Pixar Adventure brings five of the most entertaining animated films to life with a range of challenges based on scenes from the movies.

Kinect Rush follows on from Kinect Disneyland Adventures in giving players the chance to immerse themselves in games based on Disney's characters and movies. Kinect Rush features games based on The Incredibles, Ratatouille, Up!, Cars and Toy Story.

The gameplay itself promises a variety of challenges which should see players having to be very energetic. So far this includes, running, throwing, holding out arms like and aeroplane and swimming.

The quality of the scenes seems to be very high, with characters looks and movement from the films reproduced perfectly. The games seem to be a mix of scenes taken directly from the film, while others are inspired by the settings and characters. For example, one game challenges you to help Mr Incredible by lifting cars from the street and throwing them at the Omnidroid, while another shows Remy from Ratatouille flying across the Paris rooftops collecting stars.

This is shaping up to be a highly entertaining title for young fans of the movies and it will be interesting to see whether all five films give rise to entertaining minigames in equal measure.

Kinect Rush: A Disney Pixar Adventure is currently planned for release on the XBox 360 Kinect on the 20th March 2012 in the US and is currently awaiting a UK release date.

You can support Paul by buying Kinect Rush: A Disney Pixar Adventure