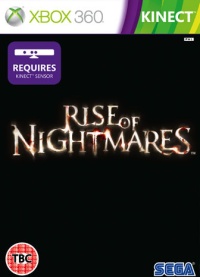 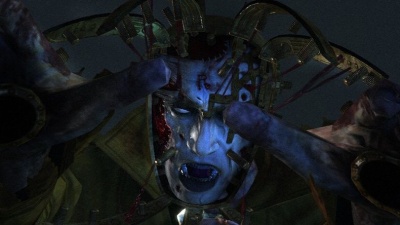 Rise of Nightmares has been released on 360 Kinect and been provided for us to preview/review by the publisher.

"to mark this year's Hallowe'en i treated myself to a festival of horror stories, movies and games, the eerie creeping, delicious jumps and gruesome oozes of many of which are still fresh in my psyche. alas, my task here is to tell tale of one of the more forgettable experiences of the season..."
- Tired Gamer (Wed, 07 Nov 2012)

Rise of Nightmares will bring the survival horror genre to Kinect. Matching House of the Dead for schlocky scares, but will the shooting be as much fun?

Is it possible to be scared by a game while flailing around in the centre of your living room floor? Sega are certainly hoping so, with Rise of Nightmares requiring players to use motion control to melee battle zombies with pipes, knuckle dusters - and sometimes just their fists. The more straightforward controls - punching the air to, well, punch - will be accompanied by on-screen buttons and prompts for more complex actions.

Developed by Sega AM1, known for their work on the House of the Dead series, Rise of Nightmares has a similar B-movie horror approach to its storytelling, putting the player in the role of an American tourist searching for his wife in a monster-filled European castle.

Enemies seem fairly standard, with zombie nurses and creepy dolls shown in early screens, although claw handed ballerinas make a change for the norm. The dripping dungeons and dimly lit ballrooms of the environments also seem relatively generic, so it really is going to come down to the controller-less control scheme to set Rise of Nightmares apart from other horror titles.

There's a dual pressure on Rise of Nightmares not just to offer something new in the survival horror genre, but to pioneer that genre on the Kinect. For Kinect to prove that it's more than a device for use in dance and fitness games, then it needs to establish itself as a valid control scheme for more traditional, mature-rated titles like this.

Sega will doubtless be looking to the shaky precedent set by the Wii, which had some early horror hits with games like Resident Evil: Umbrella Chronicles but a gradual loss of interest as players wearied of a stream of on-rails horror shooters that treated motion control as little more than a glorified light gun.

Do survival horror fans want to play such games on Kinect?

Rise of Nightmares is, at least, coming to a platform that has a long history of successful horror and action titles. The question now is whether 360-owning survival horror fans want to play such games on Kinect, or stick to their standard controllers.

Rise of Nightmares is released for 360 (with Kinect required) in September 2011.


You can support Paul by buying Rise of Nightmares