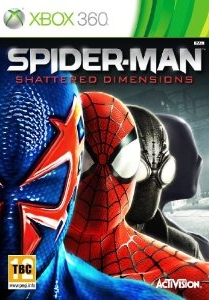 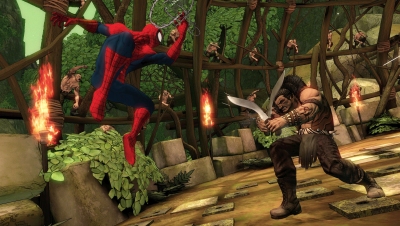 Spider-man Shattered Dimension's novel story blends unusual aspects of Marvel's universe. But the real test is how good it feels to web-swing your way around New York city.

Spider-Man Shattered Dimensions promises to integrate the four different Spider-man worlds (Amazing, Noir, 2099, and Ultimate) from Marvel Comics, enabling players to jump between four different versions of their hero. What could be a little confusing is aided by a distinct visual signature for each Spider-man as well as voice work from the actors of each respective Marvel universe.

Largely a thrid person fighting game, at key points gameplay switches to first-person to let players use the analog sticks to control Spider-Man's arms to punch their opponent. It's an unusual way to breakup the gameplay as well as offering something new for the player.

Each different Spider-Man has unique abilities. Amazing has web-attacks; Noir has stealth; 2099 has acrobatics; and Ultimate has spikes and tendrils. Players need to use the appropriate Spider-man to be able to tackle particular parts of the game.

The game is built around the story of the Tablet of Order and Chaos - that is shattered causing the multiple realities that bring each Spider-man together. You have to defeat a series of villains to collect the fragments and repair the universe. Just another normal day in the office for the web-slinger then.

You can support Paul by buying Spiderman Shattered Dimensions