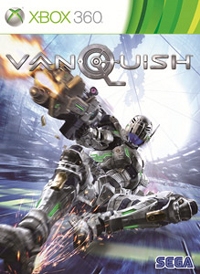 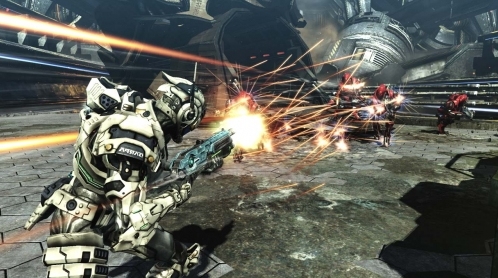 Vanquish has been released on 360 and been provided for us to preview/review by the publisher.

"Vanquish 360 sets a lightning pace from the start and doesn't let up throughout its brief campaign. Giant robots and exciting cover based shooting mechanics make it both memorable and nerve jangling..."
- Scared Gamer (Tue, 14 Dec 2010)

"Vanquish is a fast and frenetic ride, unapologetic for barely drawing breath. But beneath the power-sliding acrobatics and bullet-time action there's a back-story, with hints of Voltaire's Candide, about good intentions gone bad..."
- Soulful Gamer (Tue, 30 Nov 2010)

"Vanquish's robot suit, Russian enemy and cigarette smoking hero took me back to the 90's. But there is more here than meets the eye, stay long enough to scratch beneath the surface and you'll discover a finely balanced shooting experience..."
- Teen Gamer (Wed, 17 Nov 2010)

Shinji Mikami, of Resident Evil fame, brings weight to this epic shooter. And this is into the already rich pot of Platinum Games' previous successes with Bayonetta.

Looking something like Gears of War in space and combining it's drop-and-pop with more traditional third person run-and-gun moments, Vanquish is impressive, fluid and frenetic.

Perhaps making more of its story than it needs to, we meet a super-suite equipped Sam Gideon - government agent with an arsenal of weaponry. However hammy the dialogue, this grants the developers freedom to create some highly stylised set pieces.

Over the top in almost every way, Vanquish promises to revel in the exuberance that made Bayonetta such an unusual experience. Hyperbolic visuals more than match the narration as you work your way through futuristic cities, battle robots and provide air support.

You can support Paul by buying Vanquish