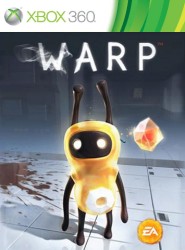 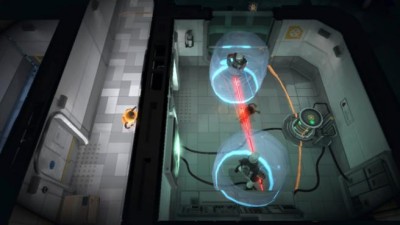 Warp 360 will offer science-lab based puzzles with lethal outcomes, with more than half an eye on Portal. Its quirky animation and slapstick visuals should make this a hilarious adventure.

In Warp, you will have the opportunity to play as Zero, an alien trying to escape from a test facility while wreaking revenge upon your captors. You will be able to make use of a variety of abilities to overcome puzzles and defeat enemies.

This includes Echo, which allows a Total Recall-style Doppelganger to trick enemies into shooting each other or objects and Swap, a skill in the vein of Ghost Trick which allows you to trade places with another object of similar size. In addition to this are Warp, Frag, and Launch.

With its stylish cartoon design and bloody outcomes, Warp could steal a march on the singular Escape Plan, due out for the Playstation Vita on the 22nd February 2012. Warp looks like it could be a highly entertaining title with some tricky puzzles combined with fast action.

Warp is currently planned for release on Xbox 360 via XBLA on the 14th February 2012, followed by Playstation 3 via PSN and Windows PC on the 13th March 2012.


You can support Paul by buying Warp