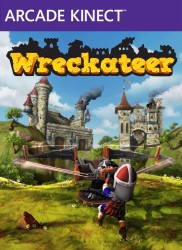 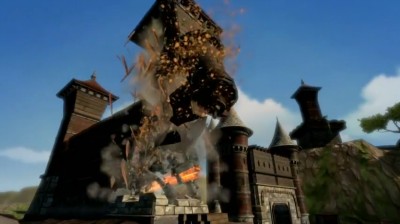 Wreckateer is a new game for Kinect in which you fire projectiles into castles and targets to achieve a high score and clear levels.

In Wreckateer, you take on the role of a worker in the Wreck & Tinker Destruction Company. Your aim is to demolish Goblin-infested castles throughout the land and to do so you have be given a giant catapult capable of firing really really big rocks. The aim of the game is to hit point targets and demolish the castles as efficiently as possible.

Obviously, the game has drawn many comparisons to Angry Birds (iOS). The USP of this game (arguably not so unique since the announcement of Angry Birds Kinect (360)) is that to control the catapult you reach out and grab the projectile, through the Kinect interface, and draw it back to aim it manually. Unlike the original Angry Birds, the game presents a firstperson perspective, allowing you to line up your shots by eye.

The strategy does not end there. Like Angry Birds (again) the game features different kinds of projectiles which can be modified post-launch. Among these are Split Shot, a shot which break into 4 pieces to do wider damage and Flying Shot, in which players to spread out their arms like a bird and glide the projectile to the target.

Wreckateer almost certainly offers enough distinctiveness to set it apart from Angry Birds and it will benefit from being a familiar concept that players can relate to. With Angry Birds Kinect (360) sticking to its side-viewed design, it will be interesting to see which is a more effective use of the Kinect controller.

Wreckateer is currently planned for release on the Xbox 360 Kinect on the 25th July 2012.


You can support Paul by buying Wreckateer