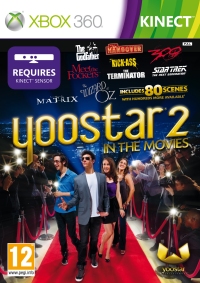 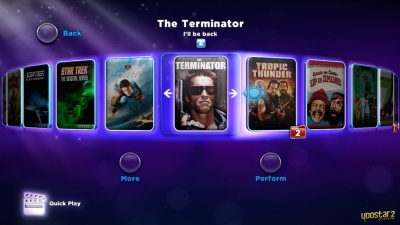 Yoostar 2: In the Movies is currently offering something a little different to gamers looking to carry on celebrating the wedding of the century.

For those that haven't experienced it, Yoostar 2: In The Movies is best described as a "movie karaoke" game, using the camera of either Kinect or Playstation Move. The game comes bundled with around 80 scenes from movies such as The Wizard of Oz, Rocky and The Mummy to classic TV series Star Trek. The challenge for players is to stand in front of the camera and take the place of one of the actors on-screen and deliver a new performance. This can either be through the promptings of the original script or through the ad-lib mode, allowing players to create their own dialogue and in some cases hilarious new outcomes for famous scenes.

As well as the bundled movies, Yoostar also features a range of online DLC to expand the experience. As part of the range of DLC, Yoostar are currently offering a very special scene featuring the recent Royal Wedding.

That's right! - players now have the chance to recreate that famous balcony kiss for themselves. As the description says 'Take your place on the palace balcony, standing before the realm's cheering subjects, and share in newlywed bliss on this joyful day.'

With interest in the recently married royals at a high level, this is sure to tempt many to try out Yoostar's unique charms for themselves and just maybe, while they are there, they will step into the shoes of Humphrey Bogart or Arnold Schwarzenegger

Yoostar 2: In the Movies is now available for XBox 360 Kinect and Playstation Move.

Yoostar 2 hopes to democratise acting in the same the way as Guitar Hero did being in a band. With just Kinect or Move you can recreate your favourite cinematic moments and let your friends pass judgement on YouTube.

You may be asking what Yoostar 2 (that's You Star) is and how you missed the first one. To cut to the chase it's Movie Karaoke. But it is no surprised you haven't heard of it if you are from our small island as it was only released in North America for PC and Mac.

Now, with Playstation Move and Kinect offering easy access to the required technology Blitz Game Studios with Namco Bandai are bringing the game to consoles. It is an attractive idea for anyone who has dreamed of acting out the roles of Terminator or Captain Kirk, and Yoostar offers just that.

Much of Yoostar 2's success will hang on the movies it has available. On the disk are a total of eighty backdrops, broken down into ten Hollywood scenes, twenty backgrounds (that can be improvised along to) and fifty scenes from specific movies from the likes of family favourite Casablanca and less friendly (but no less popular) Shaun of the Dead. There is also a store where you can buy more scenes after release.

Yoostar 2 uses all this tech and stage art to create scripted scenes that you act along to. You are then scored, like in Rock Band and Sing Star, for fluidity and tempo of your performance. Finally you can upload videos to YouTube to gain bonus points from the wider populace.

With such a simple universal appeal Yoostar 2 is certainly positioned well in the casual party game market, assuming everyone who buys has an Internet connection to get the most out of it.


You can support Paul by buying Yoostar 2