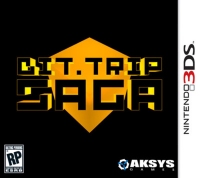 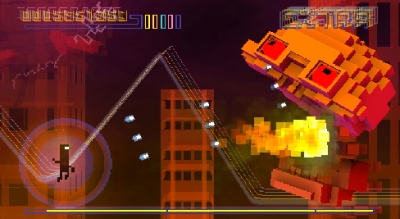 Bit.Trip Saga will bring the full Bit.Trip family to Nintendo's new console. Of most interest is how the games accommodate touch screen controls and whether any additional content will be included.

Bit.Trip games were originally developed by Gaijin Games for WiiWare and more recently the iPhone, iPod Touch and iPad. Each game features Commander Video's (of Super Meat Boy fame) attempts to save the universe. But more than any narrative similarity it is the bright disco visuals and rhythm-action gameplay that unites these titles.

Bit.Trip Saga 3DS brings all six of the previously released Bit.Trip games to Nintendo's new handheld console. The full list of these games include the pong-like Bit.Trip Beat, the pulsating shapes of Bit.Trip Core, the black hole of Bit.Trip Void, the platforming of Bit.Trip Runner, the shooting of Bit.Trip Fate and the cooperative Bit.Trip Flux.

It remains to be seen whether the 3DS version will offer enhanced visuals (although this is likely) or new challenges and modes (which is less likely). In terms of controls a clear precedent has been set with the iPhone versions of the game, which the 3DS is likely to adopt, although without the multi-touch aspects.

Bit.Trip Saga is expected to be released on 3DS on September 13th 2011 in the US, with no date announced in the UK as yet.

You can support Paul by buying Bit.Trip Saga