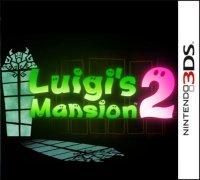 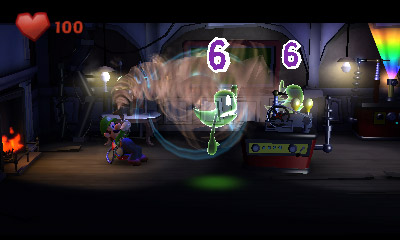 Luigi's Mansion is continuing to take shape as one of the most remarkable titles due out for 3DS in 2012. Designed specifically for the 3DS, the game makes brilliant use of the 3D display to created haunted rooms, long corridors and to bring the brilliantly vivid characters to life.

While the core gameplay revolves around tracking and capturing the errant spirits loose throughout the spooky mansion, what is already clear is how much effort has gone into making each location part of the playground. Rugs roll up, tablecloths can be pulled off, ceiling fans spun - all to reveal hidden areas and coins and to make every part of Luigi's quest a miniature playground.

Add to this plenty of slapstick and character (and the terrific moment when a ghost changes expression from haunting to a look of sheer terror as it tries to escape Luigi's Poltergust vacuum cleaner) and Luigi's Mansion 2 could be an instant classic when it is released next year.

Luigi's Mansion 2 is currently due for release for the Nintendo 3DS in 2012.

The only surprise more welcome than Nintendo's sudden announcement of Luigi's Mansion 3DS at this year's E3 expo was that the game was available to play immediately after the press conference. Normally between a game's annoucement and release there is a drip-feed of tantalising information and screenshots before the lucky few are able to get some quality time with a game nearing completion.

A whole new game, rather than a re-release of a prior title on the 3D system, Luigi's Mansion 2 is a legitimate sequel to the classic GameCube adventure.

Playing Luigi's Mansion 2, it immediately feels as though this game has somehow found a perfect home on the 3D handheld. While traversing the external environments the camera sits close behind Luigi as he moves forward into receeding depths to reveal a haunted residence in the distance.

Once inside the camera switches to a side view and each of the 3D rooms becomes like a wonderful interactive diorama, with Luigi moving between the rooms of a spooky mansion. The depth of each room is conveyed beautifully as Luigi scuttles behind obstructions and collects coins. Random power outages plunge the player into darkness, the only lighting coming from Luigi's dim torch and the lightning which flashes eerily outside the windows.

Luigi's Mansion 2 oozes atmosphere and Luigi's own unique and timid character is free to take center stage as he fearfully tackles the spooks as they manifest about him. There is an engrossing and relaxed cinematic style to the proceedings which put me in mind of Scooby Doo's light-hearted scares.


You can support Paul by buying Luigi's Mansion 2