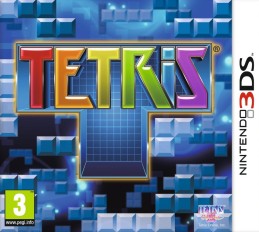 Other GamePeople columnists have reviewed this from their perspective - huh?:
Tech Gamer (3DS) 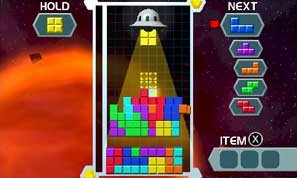 Tetris: Axis has been released on 3DS and been provided for us to preview/review by the publisher.

"Tetris 3DS is a treasure chest of game modes and options. There are a couple of ragged edges, but for the most part this collection is a definitive narrative in the block stacking cannon..."
- Tech Gamer (Sat, 28 Jan 2012)

Tetris: Axis brings the grand-daddy of Nintendo franchises onto the 3DS with a range of new play styles as well as that classic Tetris formula.

With the name Tetris: Axis it's tempting to think that Nintendo have finally succumbed to the fad of releasing everything as a WWII-themed shooter. Thankfully this isn't the case and Tetris: Axis proves that there are still plenty of new ways that seven unique shapes can provide a range of puzzle-based games.

The first and most appealing feature is the return of the classic Marathon mode. This will make use of the AR capability of the 3DS by super-imposing the Tetris wall on a real surface in your environment. This means that for those that haven't given their ? card an outing in recent times it may be time to search for it. Also utilising the AR mode is a game type called Climber, in which Tetris blocks must be dropped to form a staircase for a figure climbing a cylindrical tower. The player will have to move around the object in order to place falling shapes. It remains to be seen how enjoyable this mode becomes in practice and how well suited the lengthy rounds of Tetris are to standing and moving around.

Tetris: Axis is also getting some SpotPass functionality which allows players to acquire new items to use in-game to achieve higher scores. For those in less social 3DS areas, hopefully this won't detract from enjoying the game itself.

In addition to these there are over 20 variations on the Tetris theme, including Jigsaw, Capture and Fit. Multiplayer also benefits of a huge array of choice including local Wi-Fi, Download Play and World Battle via online multiplayer. All of these support up to 8 players.

Compared to early release titles like Pilotwings Resort - which generated debate about the small amount of content it provided for a full price game - I think Tetris Axis delivers a huge amount of content at a budget price point. With the game set to be available for less than Ł20, it is a generous offer and refreshing that Nintendo recognise the need to encourage gamers to buy yet another iteration of Tetris.

But, as iterations go, it looks as though Tetris: Axis has a range of options which will make use of some of the 3DS' great feature and should be a must-have title for any owners of the console.

Tetris: Axis is currently planned for release on the Nintendo 3DS on the 21st October 2011.


You can support Paul by buying Tetris: Axis