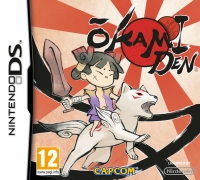 Other GamePeople columnists have reviewed this from their perspective - huh?:
Story Gamer (DS)
Family Gamer (DS) 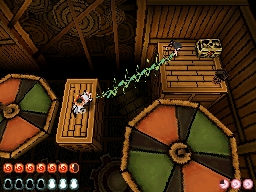 Okamiden has been released on DS and been provided for us to preview/review by the publisher.

"Okamiden DS is a beautiful intruiging game, but the glittering surface fails to disguise the fact it's nowhere near as inventive as it should be..."
- Story Gamer (Mon, 12 Sep 2011)

"Okamiden DS is a perfectly formed adorable adventure that feels more like Zelda than both Phantom Hourglass and Spirit Tracks. While on the original DS it's technically impressive, well written and beautiful to look at, put it in a 3DS and it turns into something rather magical..."
- Family Gamer (Sun, 08 May 2011)

Okamiden brings the dream of a portable Okami one step closer with a firm release date.

The picturesque action adventure had been hovering around various dates early next year. It's now been confirmed that it will be released March 18th in Europe and Australia.

Some new art has also been revealed, along with the finalised box art that pictures the famous wolf along with his new young rider.

Okamiden is the pocket sized adventure follow up to the acclaimed PlayStation 2 role playing game Okami. Stylus controls, a fresh story and calligraphy aesthetics promise to deliver an engaging experience.

Returning us to a fresh adventure, here we play as wolf pup Chibiterasu and restore colour to the world with his celestial paintbrush. This translates Okami's use of sticks on the PlayStation 2 to the DS stylus perfectly. Now brushstrokes are pressure sensitive enabling you to recreate the look of the Sumi-e artwork that features throughout the game.

Okamiden feature new characters such as Kuni, a swordsman and Nanumi, a mermaid who will give you additional abilities with which to explore the world. Although, looking like a game aimed at a younger audience the complex themes covered by the story promise a very adult and narrative rich experience.

Whilst moving to the smaller screens of the Nintendo DS has seen a noticeable drop in visual fidelity, the artists at Capcom have still done an amazing job of capturing the Japanese calligraphy and scroll painting visuals.

Okamiden will be released for the Nintendo DS in early 2011.

You can support Paul by buying Okamiden