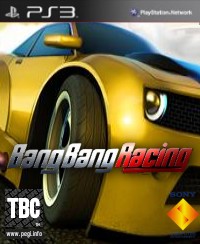 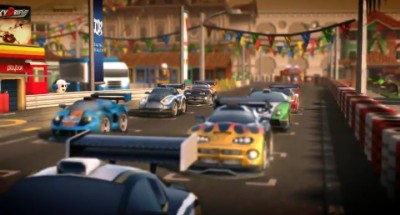 Bang Bang Racing will offer local four-player split-screen multiplayer. There's no clear word on online multiplayer which could be a real disappointment as this game looks slick, competitive and exciting. However even the promise of a good offline racer is exciting.

There are 9 courses in total across worldwide locations, which can be played normally or in reverse. To further mix things up each game should offer a unique experience; not only is there the usual shortcuts and player customisable skins, but the course will be littered with obstacles such as cones and exploding barrels which appear in randomly generated places, ensuring that every race is slightly different.

It looks like a more racing-focused cousin to Renegade Ops (PS3) with a top-down view on the racing. Older gamers may remember the unfortunately titled Skidmarks which was a hugely popular frantic racing game on the Amiga in the early 90s. If this game can capture any of the spirit of that classic then this could be an essential title. If that means nothing to you, then imagine a version of Micro Machines with more realistic vehicle handling.

Bang Bang Racing is currently planned for release on PlayStation 3 via PSN, Xbox LIVE Arcade and Windows PC during Summer 2012.


You can support Paul by buying Bang Bang Racing