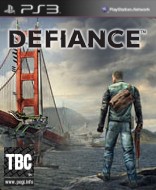 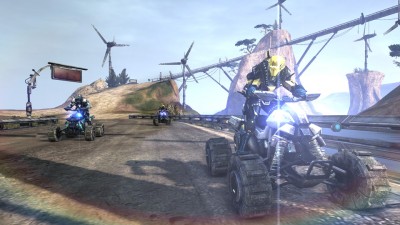 Defiance is a new multiplayer shooter, designed to coincide with and run alongside a new Sci-Fi TV show. As the actors step into their roles and the game's details emerge, just what kind of game is this taking shape to be?

When I original encountered Defiance (PC) two years ago, I was impressed by the promise of a live multiplayer shooter which ran alongside an episodic TV. One impressive part was that the show's major events would feed into world events in the game as the episodes went out. The other, incredibly impressive part was the promise that the actions of players in altering the game world would then feed back into the series, possibly even result in the name-checking of particularly high-profile players.

It's as hard to imagine now as it was back then and I confess that I have been expecting this dual-interaction to fall away as the project became more realistic. But, it's heartening to see that the game and TV show's website still bears the tag-line, "Watch the Show; Play the Game; Change the World."

Defiance, as a game, is looking very slick - if a little like any other futuristic shooter. It features vehicles and a huge massively multiplayer world but it's still hard to imagine how the players can impact the world more significantly with just guns, quad-bikes and grenades. It's also nice to see the game confirmed for Xbox 360 and PS3 as well as PC. What would be truly amazing is to see the game world shared between players on different formats, but this is sadly unlikely.

Still, I'm looking forward to seeing even more details about Defiance emerge for consoles and television, because it's an idea I really want to see succeed. In my Novel Gamer column, I revel in the possibilities for stories coming out of gameplay experiences. It would be truly great to see gameplay experiences end up on the screen like never before.

Being part-produced by the SyFy channel of course the TV show will presumably only be viewable to those with an appropriate channel subscription. This will surely damage the potential audience in the UK and what would be really exciting is for the game version to provide a portal through which players can gain access to the episodes. We'll just have to wait and see.

Defiance is currently planned for release on the Playstation 3, Xbox 360 and Windows PC and is due for release alongside the TV series in April 2013.


You can support Paul by buying Defiance