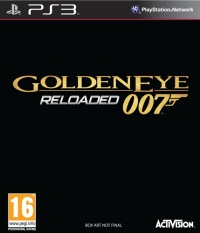 Other GamePeople columnists have reviewed this from their perspective - huh?:
Multiplayer Gamer (360)
Tired Gamer (360) 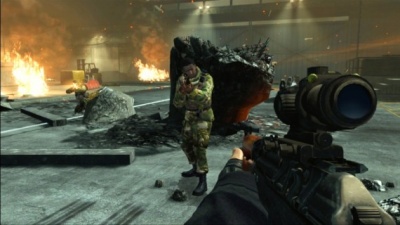 GoldenEye 007 Reloaded has been released on PS and been provided for us to preview/review by the publisher.

"GoldenEye 007 Reloaded 360 makes a creditable attempt to revive a 1990s approach to multiplayer shooting, but for online players it locks too many goodies away as rewards for hours of grinding..."
- Multiplayer Gamer (Sun, 12 Feb 2012)

"when i reviewed the Wii version of Goldeneye 007: Reloaded last year, i couldn't help but indulge a short rant about the market-oriented cynicism that so obviously stood behind its conception. perhaps it's because i'm a little older, a little mellower, a little less (or perhaps more) tired than i was back then, but this week i found myself able to unwrap the just-landed 360 version without the ire rising too fast or far..."
- Tired Gamer (Tue, 20 Dec 2011)

While it didn't supercede memories of its feted N64 predecessor, 2010's GoldenEye 007 on Wii did prove itself to be a worthwhile shooter in its own right. Updating the movie's story - including swapping Pierce Brosnan for current Bond Daniel Craig - it delivered an interesting take on the movie's story as well as a solid FPS experience on the Wii.

Wii-less PS3 and 360 owners will get a chance to try this intriguing reworking of an old favourite when GoldenEye 007 Reloaded hits their consoles of choice later this year.

GoldenEye 007 was a good-looking game by Wii standards, but Reloaded will have an HD makeover, and the first trailer and screens show a game that, while not at the cutting edge of console visuals, certainly looks snappier than the Wii version. Developers Eurocom are also promising some improvements under the hood, with tweaks to the rather straightforward enemy AI in the 2010 game.

To increase replayability there's also MI6 Ops Missions mode, which applies new game modes to the levels. Ops Missions are singleplayer only, and at this stage its hard to tell how much longevity they'll add for anyone other than dedicated fans and obsessive achievement collectors.

The multiplayer for GoldenEye 007 on Wii was marketed mainly as a return to the (if you'll excuse the pun) golden age of around-the-television split-screen play that characterised the N64 game. It's arguable how doomed such an effort to turn the clock back was, but Reloaded abandons this retro project in favour of fully functional online multiplayer, with new options and maps not included on the Wii. With some great twists on environments from the movie available for play, the multiplayer should definitely be worth a look

Will PS3 and 360 owners want to pick up a remake of a year old Wii game, even with this level of polish? There's certainly no shortage of shooters available on either platform, but there's plenty that's intriguing about GoldenEye 007 Reloaded, and voice-acting from Daniel Craig, Judi Dench and Rory Kinnear should make it well worth a look for fans of the Bond movies.


You can support Paul by buying GoldenEye 007 Reloaded