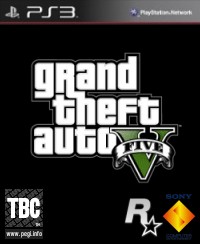 Grand Theft Auto V marks another major milestone in the open world crime series and sets out to prove that GTA can only get bigger, better and more controversial.

Grand Theft Auto V promises to deliver a grand new city in which to immerse yourself. These games are typically huge, but the first thing that strikes about the early images of GTA V is the staggering range of locales, featuring both inner-city and more rural settings. It's early days, but it's safe to say that this modern re-imagining of Los Angeles is likely to impress greatly.

It's been a few years since we saw the genuine step forward which GTA IV represented. Episodes from Liberty City filled that huge gameplay space with more character, story and missions but the impact of seeing the next-generation Liberty City for the first time cannot be underestimated.

What is also staggering about any GTA title is the sheer amount of content which manages to be packed in. GTA IV allows you to go on dates, play darts, watch TV, listen to the radio and even visit a comedy club. As Rockstar are promising that GTA V will be even bigger, then you can expect to see an incredible range of distractions alongside the epic singleplayer story.

Grand Theft Auto has become a byword among the population for the utmost guilty pleasure in gaming. A box full of moral and immoral choices and backed up by crazy stunts, fast driving and extreme violence checked only by your own personal choice. Rockstar have rarely hidden away from controversy, filling their games with satire and brutal honesty about urban living which always sails close to offence. GTA V looks to be no exception, with screens already indicating the huge gap between rich and poor and the availability of carnal pleasures.

If I have two hopes for Grand Theft Auto V, one is that much more is made of the co-op gameplay. What they have done previously is impressive, but I would like to see far more extensive co-operative play styles allowed for.

My second hope is that GTA V will be released before the end of 2012. However, I suspect that may be a hope too far.

Grand Theft Auto V is currently in development for the PS3, Xbox 360 and Windows PC and is currently awaiting a confirmed release date.


You can support Paul by buying GTA V