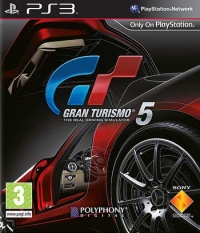 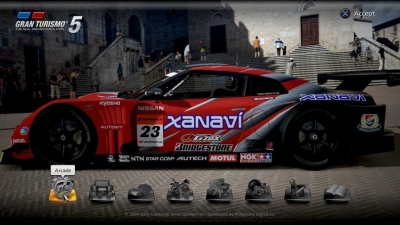 Gran Turismo 5 has been released on PS3 and been provided for us to preview/review by the publisher.

"Gran Turismo 5 handles itself masterly. Even with its shortcomings it still convinces as the only racing game in town for real enthusiasts..."
- Motoring Gamer (Sun, 03 Jul 2011)

"Gran Turismo 5 deserves to be savoured. It took a long time coming, but now it's here it can be enjoyed in 3D glory. What's most impressive though is the amount of restraint shown. It cleverly applies 3D depth only when it makes a different to the driving experience..."
- Tech Gamer (Tue, 18 Jan 2011)

"Gran Turismo 5 maybe late, unfinished and difficult but such is the power of its singular driving experience I really don't care. Day-night cycles, weather, online racing and car damage maybe the headlines, but it is the same old GT experience that kept me coming back..."
- Family Gamer (Wed, 01 Dec 2010)

Gran Turismo 5 sparks back into life with real damage, weather and headlights (ed: not to mention windscreen wipers). After such a wait expectations are high, but it does promise to be a suitably bulging delivery for its extended gestation.

Gran Turismo 5 finally adds car damage and weather effects alongside its usual feverishly accurate array of cars and circuits. But more than the individual features it's how they come together to create a real spark of life that really makes you tingle.

Gran Turismo 5 (GT5) will also offer optional Stereoscopic-3D, that promises to push realism and graphical fidelity even further. This is found in the new dynamic skid marks, dust and grass being kick-up, not to mention headlights and windscreen wipers.

Go-Karting joins the usual combination of on and off road races. The normal vehicles in GT5 are spread between Standard and Premium, where Premium stock offers full damage such as body panels being ripped off. The vehicle roster includes Lamborghini and Bugatti cars making their first appearance. The McLaren F1 road car and Le Mans spec cars also return to offer some genuine high end challenges.

There are a strong 20 locations and 70 tracks to take these cars through their paces. These include various real-life circuits like Daytona Speedway, Nürburgring Nordschleife, Tsukuba Circuit, Mazda Laguna Seca Raceway and Suzuka Circuit.

You can support Paul by buying Gran Turismo 5