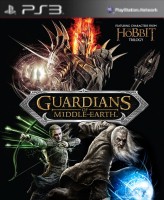 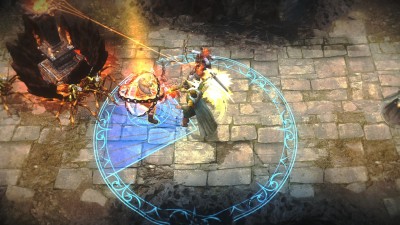 Guardians of Middle Earth is a Tolkien-inspired multiplayer blast through tough arenas. With The Hobbit: An Unexpected Journey riding high in the cinema, a nicely-timed Bilbo Baggins DLC is just the thing.

Guardians of Middle Earth is a multiplayer co-operative strategy/action hybrid. It is similar to classic Real-Time-Strategy titles, with units to command and send into battle, with the twist that each participating player actually controls the game through a single character they control directly, similar to the Multiplayer components of Brutal Legend (360) or Darwinia (PC).

The game is inspired by characters and settings from The Hobbit, Lord of the Rings and other Tolkien titles, but it's fair to say that the story content of this kind of multiplayer arena battling does not seek to recreate the story or events from the books/films.

This is a plot-free strategy romp featuring characters designed to look closely like the actors from the Peter Jackson's films. With The Hobbit: An Unexpected Journey currently in the cinema, new DLC is available for Guardians of Middle Earth, featuring Bilbo Baggins and a Troll as playable characters.

The gameplay style is part of a MOBA (Multiplayer Online Battle Arena) sub-genre of strategy titles. Interestingly, this is a fairly common and popular game style on PC, but Guardians of Middle Earth enjoys a fairly rarefied position on gaming consoles and as such features a more streamlined and cinematic design.

Guardians of Middle Earth is now available on the Playstation 3 and Xbox 360 as a retail and downloadable release.


You can support Paul by buying Guardians of Middle Earth