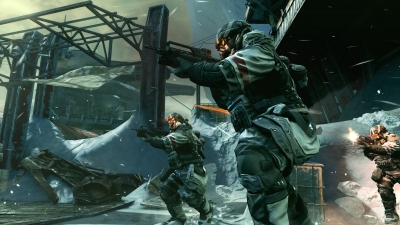 Killzone 3 has been released on PS3 and been provided for us to preview/review by the publisher.

"Killzone 3 for PS3 adds variety but loses the series' visceral experience. I was teed up for a gritty, ear-splitting story in a desolate landscape, but I got a whistle stop tour that emphasised variety over the raw feeling of combat..."
- Dressup Gamer (Wed, 30 Mar 2011)

Killzone 3's motion controls, Jetpacks and split-screen multiplayer are all very welcome, but don't hide the fact that this is essentially more of the same. No complaints about that from me though.

Killzone 3 picks up where Killzone 2 left off, following the story of a futuristic special forces fighting the fascist Helghast empire. The plot has Sev and his comrade Rico caught in the crossfire between political factions, and will provide more insight into the Helghan enemy's culture.

The story and characters may be cliched, but the Killzone series is popular for its stunning visuals and solid first-person-shooter gameplay, in both single and multiplayer modes.

Killzone 3 will follow the same basic formula as Killzone 2, with a few additions and refinements. Melee combat is gaining new attacks and combos, and players will now be able to use Jetpacks for a quick height boost (ed: Halo Reach anyone?).

In addition to the usual online multiplayer, Killzone 3 will include a split-screen multiplayer mode for local co-op play. Another addition is motion control, with the ability to use PlayStation Move for aiming and other functions. There will also be a 3D mode for those with a 3D-capable TV.


You can support Paul by buying Killzone 3