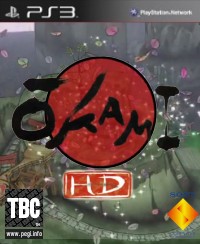 Other GamePeople columnists have reviewed this from their perspective - huh?:
Novel Gamer (PS3) 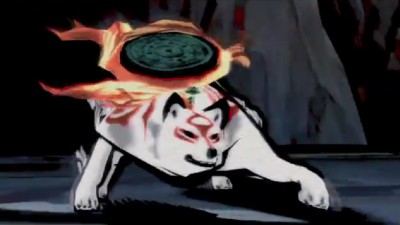 Okami HD has been released on PS3 Move and been provided for us to preview/review by the publisher.

"Okami HD is a beautiful and necessary update. My own journey with this gem is fragmented and has a checkered history going all the way back to the PS2 and Wii versions..."
- Novel Gamer (Wed, 02 Jan 2013)

Okami HD is a welcome return for the goddess-cum-wolf with a graphical update as well as support for the Move controller and a range of trophies.

Okami is a game which was loved by most of the people who played it. It was also one of those games that huge swathes of the gaming population seemed to miss - myself included! Seeing the comments online it's surprising just how many people always intended to play it but never made the time. It arrived at the end of the PS2's life and also enjoyed a successful port to the Wii. A DS-specific version, Okamiden (DS) was more of a spin-off, but still very well received.

If you haven't played it or come across it, Okami is a game in which you play a wolf incarnation of a Japanese sun goddess who must restore light and life to the land. The game is most distinctive for its art style, which recreates Eastern ink paintings. In terms of gameplay, it is probably the closest alternative to a legitimate Zelda title that you will get to play on a non-Nintendo machine any time soon.

Now the game is coming to PSN in Autumn as Okami HD, providing another chance to play it afresh. It will also boast trophies as well as support for the PS Move controller, presumably for the calligraphy painting sequences.

It will be interesting to see if all the gamers who are decrying their missed opportunity will take the chance to pick Okami HD up now. In any case, the number of fans who are relishing the opportunity to relive this game with trophies and sharper visuals should give it success.

Okami HD will be available on Playstation 3 via PSN at the end of 2012.


You can support Paul by buying Okami HD