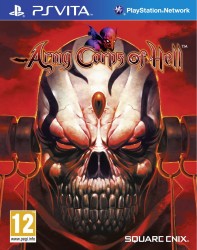 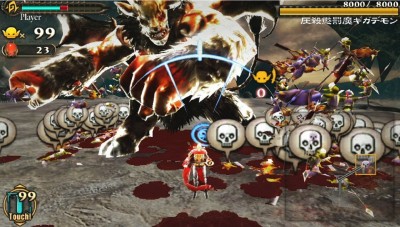 Army Corps of Hell looks to be a highly unusual mix of the RTS and crowd-brawling genres. With goblins fighting through Hell and a heavy metal soundtracks, it's an eerily familiar setting.

Army Corps of Hell sees you take control of a single hero general who is fighting his way through hell. You are surrounded by 100 goblins who can be equipped, trained and specialise to help fight the enemy. It is an interesting mix of RTS combat and melee fighting which I have personally only previously experienced in Brutal Legend.

On the surface, at least, comparisons to Brutal Legend persist, with the game's humorous style and outlandish attacks, all accompanied by an ultra-hard Heavy Metal soundtrack. Of course for those without a taste for Metal, it should be possible to use custom soundtracks while playing the game.

Army Corps of Hell will utilise the rear touch panel to assign orders to your goblin underlings, while the main control pads will allow direct control of the hero. Furthermore, your support goblins can be used to play musical instruments which can buff your party and provide healing.

As well as this, there is an ad-hoc co-operative mode which will allow you to team up with other players to take on more challenging enemies. Unfortunately there does not appear to be any online support for multiplayer.

Army Corps of Hell is currently planned for release on the Playstation Vita on the 22nd February 2012.


You can support Paul by buying Army Corps of Hell