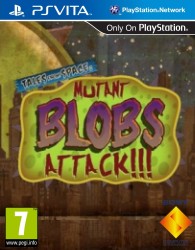 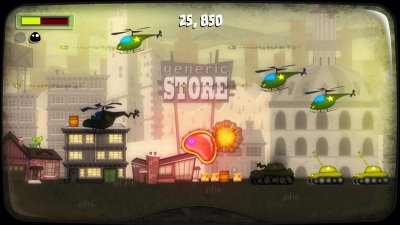 Tales From Space: Mutant Blobs Attack is a decidedly tongue-in-cheek platformer, set in a retro science fiction take on the 1950's.

Tales From Space: Mutant Blobs Attack looks set to be a loving pastiche of the monster movies of the 1950's with a simple plot featuring the escape of mutated intelligent blobs from a research laboratory. Throughout their escape the blobs will consume anything in their path, gradually growing to enormous size to eat tanks and helicopters, in a kind of violent 2D take on Touch My Katamari (Vita).

There are more than two dozen levels, with a mix of regular platforming alongside gravity defying sticky surfaces and speed runs to provide some variety. In addition to the main action which makes use of the PS Vita's touch controls, there are a series of bonus levels which are specific gyroscope control challenges.

The game was released as a downloadable title alongside the launch of the Playstation Vita on Wednesday. Early reports suggest that a certain number of the people who installed it on the first two days of release have had installation problems which require Sony Customer Support to fix. Hopefully this is an issue which Sony will resolve in downloadable Vita titles ASAP.

Tales From Space: Mutant Blobs Attack is now available for the Playstation Vita.


You can support Paul by buying Tales from Space: Mutant Blobs Attack