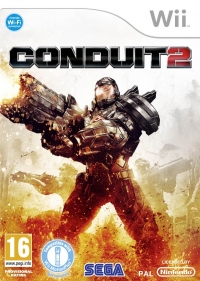 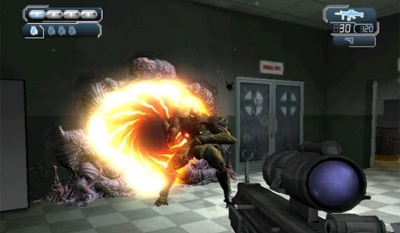 Conduit 2 has been released on Nintendo Wii and been provided for us to preview/review by the publisher.

"Although Conduit 2 obviously isn't designed for me, I appreciated how accessible a version of these games my son enjoys it is. Even I could cope with the controls and pull off the odd head-shot (as I understand it is called)..."
- Domestic Gamer (Tue, 26 Apr 2011)

Conduit 2 will provide a globetrotting battle against alien invasion, as it ploughs the sparse furrow of first-person shooters on the Wii.

While The Conduit focused on the initial invasion of Washington DC, this sequel will have a broader scope, as Michael Ford travels to several locations around the world. The Drudge (alien-human hybrid soldiers) are back, as well as new enemies.

Conduit 2 promises stronger art direction and story, as well as a range of refinements from more sophisticated enemy AI to new cover mechanics. The environments will be more open, with incentive to explore and scan for hidden items and traps.

Like before, it will still be highly customisable for those who like to tweak the interface and controls. New peripheral support has also been added, including the option to use Wii MotionPlus, Classic Controller, or Classic Controller Pro.

Conduit 2 will be released on February 15, 2011 in North America, with a European release expected later in 2011.


You can support Paul by buying Conduit 2