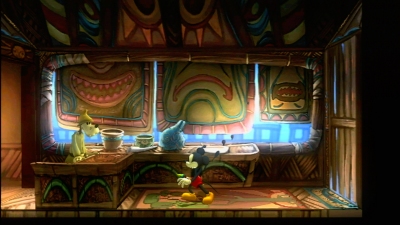 Epic Mickey has been released on Nintendo Wii and been provided for us to preview/review by the publisher.

"Mickey is persuaded out of retirement for one last game. With Epic Mickey 2 on the horizon Chris Jarvis's telling radio play about the game offers some insight into its pitfalls..."
- Novel Gamer (Wed, 16 May 2012)

"Epic Mickey promised a dark artsy experience. However, while the game takes a fascinating and unique look at the history of one of animation's most iconic studios, it fails to create an enjoyable experience..."
- Story Gamer (Mon, 07 Feb 2011)

"Epic Mickey's story runs very deep but needs expert hands to progress. The AWOL with camera and fiddly mechanics are all worth it though, for the genuinely new and unique way to experience a story..."
- Family Gamer (Thu, 25 Nov 2010)

Epic Mickey Wii is almost upon us, new screen shots show more of the colouring game play from this unusually grown-up platformer for Disney's iconic character.

Warren Spector hopes to take the Wii into new territory with Epic Mickey. But more than the novel game play mechanics that make use of the Wii Remote's abilities it is Spector's own ability to cast an engaging story that will make or break this game.

Strong progression and a well narrated experience make Epic Mickey a more enticing proposition. But there is a lot to deliver on here for the game to break through the third party barrier on the Wii.

Epic Mickey will be released on 26th November in Europe.

Epic Mickey is darker and more grownup, but also offers an unusual platforming experience that references most of Disney's back catalogue.

Epic Mickey Wii is a platforming game where you can change the world by painting or erasing its fabric. A little like Mickey's Castle of Illusion back on the Megadrive its mechanic should appeal to a more specialist gaming audience rather than just casual players.

As well as shaping the world, players can also control how the story unfolds. Challenges can be tackled at their own pace as they explore various possibilities and storylines - each with different consequences.

Along with mechanics, the game's production and Disney historicity is well attended to. A range of classic Disney characters and sequences are included that will tug the heart strings of those that remember them as well as (cleverly) introduce younger players to the Disney DVD back catalogue.

Epic Mickey will be released on 26th November in Europe.

You can support Paul by buying Epic Mickey