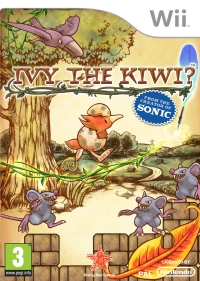 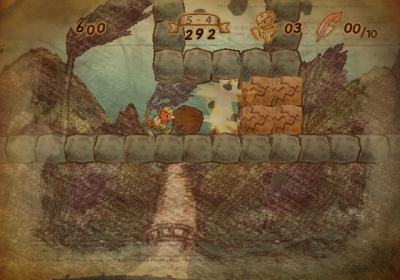 Ivy the Kiwi has been released on Nintendo Wii and been provided for us to preview/review by the publisher.

"Ivy the Kiwi plays as unusually as it looks. Simple vine stretching controls on both DS and Wii turn a basic platform game into a real puzzle as Prope prove once again that they are kings of the avant-garde..."
- Family Gamer (Fri, 19 Nov 2010)

Ivy the Kiwi continues Prope's relationship with childhood trauma. This time it's in fairy tale form with their inventive new platform game.

Ivy the Kiwi not only looks like a hand drawn fairy tale but addresses similar themes - loss, loneliness and abandonment. Dropped in a forest estranged from her parents and alone Ivy sets off on her platforming journey. It reminded us of Prope's previous game Let's Catch that had a similar sideways glance at unsettling childhood themes through the dialogue of each catching partner.

Players guide Ivy by drawing vines with the Wii-mote or DS stylus to create a safe passage through the 2D maze of platforms. Use alone or in combination, they can be used to solve puzzles as well as propel Ivy through the environment.

Each of the 100 levels challenges players to traverse pits, spikes, rats or even monstrous raindrops. The vines can be drawn to stop Ivy falling to her death, but also to slingshot her to out of reach platforms.

The game comes from Yuji Naka, creator of Sonic the Hedgehog and looks to include action from that style of platform game along side a New Zealand Story aesthetic and Yoshi Touch and Go's platform drawing play mechanic.

You can support Paul by buying Ivy the Kiwi