Showcase game for Wii U Touchscreen 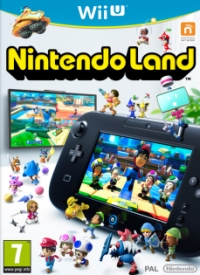 Other GamePeople columnists have reviewed this from their perspective - huh?:
Family Podcast (WIIU) 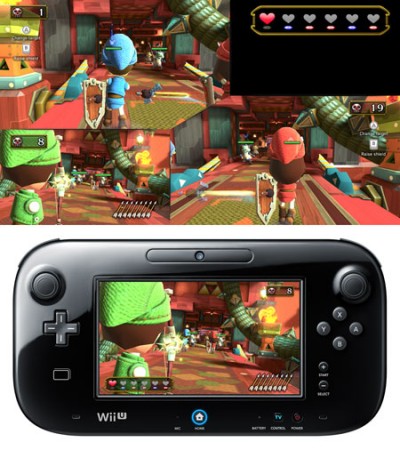 Nintendo Land has been released on Nintendo Wii and been provided for us to preview/review by the publisher.

"Nintendo Land is a flagship title for the new Wii U console, expected to demonstrate the variety and promise of the new controller. In these episodes of FamilyGamerTV, our whole family puts the game through its paces and we find a surprising level of longevity..."
- Family Gamer (Tue, 18 Dec 2012)

"This week in the family gaming show Adam Rosser invited me to talk about family gaming at Christmas, Nintendo Land on the Wii U and Paper Mario Sticker Star on the 3DS XL. Also broadcast on Radio 5 Live..."
- Family Gamer Podcast (Mon, 10 Dec 2012)

Nintendo Land is the showcase title for Wii U, with a range of games designed to highlight many different uses for the new Wii U control pad and touchscreen.

When I first heard the title Nintendo Land I confess I had images of a Disney-styled theme park, except one in which nearby staff waved pictures of open windows at you and encouraged you to sit down for a break every 15 minutes, to stop yourself getting out of breath or overexcited.

Designed as a theme park with 12 different themes, each based on a Nintendo franchise (although some of them are a little obscure), Nintendo Land features a variety of games. There is a Zelda-themed level in which the Wii U Pad player fires arrows in firstperson, while up to three other players wield Wii-motes as swords to help clear a dungeon. There is also an Animal Crossing level, in which the Pad player must guard against other players stealing sweets.

For me there are two games which look particularly interesting. One is a Ninja-themed shooting gallery, in which shuriken are launched by swiping the touchscreen on the pad. I will be fascinated to see the range of accuracy and control which this method promises.

The second is Luigi's Ghost Mansion. This is another multiplayer mode, in which the four players with Wii-motes are searching a Pac-Man style maze for a Ghost. The Ghost is controlled by the Pad player. What is clever is that the Ghost can see everything, but the Wii-mote players see the same display, only without the location of the Ghost. The Ghost player must sneak up on the other players, without getting spotted in a torch beam. I think this is intriguing, because it sounds a little like classic Metal Gear Solid stealth gameplay, only with human players controlling the guards. This could totally redefine the challenge.

One of the unfortunate things which granted Wii Sports such longevity was the lack of any titles for a long time which showed the same clever use of the new controller. Hopefully lessons have been learned since then and the Wii U developers are better prepared to come up with interesting titles that can make this console a must-have.

Nintendo are reportedly as-yet-undecided on whether Nintendo Land will be a bundled game, as Wii Sports was with the original Wii. It's likely to be a decision which comes down to the eventual price point of the Wii U console itself.

Nintendo Land is currently planned for release on the Wii U at launch, towards the end of 2012.


You can support Paul by buying Nintendo Land