Other GamePeople columnists have reviewed this from their perspective - huh?:
Dressup Gamer (360)
Multiplayer Gamer (360)
Reporting Gamer (360) 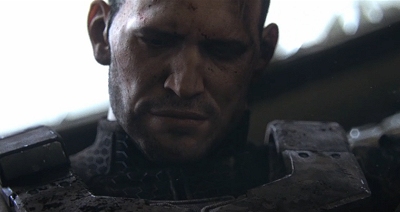 Mass Effect 3's appearance at E3 didn't surprise me -- but what did was the way a very simple implementation of voice technology suddenly opened my eyes to how this epic RPG universe could suddenly become a drama in which I was truly taking part.

At Microsoft's E3 presentation we were given the chance to see some action from the upcoming Mass Effect 3 - featuring a return of Shepherd and a host of new tricks. Bioware and Microsoft are making a big thing of Kinect-enhancement of games this year. We've already seen a lot of Kinect-specific titles -- largely focusing on the sports and dancing possibilities of the full-body tracking technology -- but this year could be the time we finally see how Kinect enhancements can offer a greater feeling of immersion to more traditional gaming titles.

Mass Effect 3 makes use of the voice recognition capabilities of Kinect to allow the player to control the game with speech. There are voice activated commands to choose weapons and select attacks during combat, as you would expect. But it was the addition of voice selection during the dialogue sequences that had a profound impact on me and my expectations.

Rather than choosing a text option, the player can deliver one of the possible lines of dialogue and the game will continue. Shepherd does not echo the line, but provides a continuation of the text, meaning that the player's delivery of the line remains a solo effort.

This seems like a small shift but to my mind as a sometime actor and role-player (ed: how multi-talented!) this is a step towards a whole new level of immersion and expression in video game stories. If adventure games tap into a deep love of make-believe and wish-fulfilment then allowing the player to deliver the dialogue themselves introduces a wonderful little piece of humanity into gameplay. If video games are make-believe, then this is the equivalent of being given a first childhood bow-and-arrow and teepee playset.

This seems like a small shift but to my mind this a whole new level of immersion.

It suggests an interesting promise for the future. Although it's hard to imagine this being implemented in this iteration of Mass Effect 3, how much greater would it be great to see a game's outcomes change based on how the dialogue is delivered, rather than simply the words?

Games have experimented in the past with dialogue options allowing the player to take an aggressive, defensive or neutral stance in dialogue; What would happen if a game interpreted the player's tone of voice and used this information to adjust the way characters respond to you? How would if be if a game picked up a players natural attitude towards a character?

However, even without these wishes coming true just yet, I found that being given the option to take part in the unfolding drama by delivering the dialogue myself to be a game-changing shift in immersion and interaction and has definitely whetted my appetite for Mass Effect 3.

This represents a true step forward for Kinect.

By combining traditional controls for movement and combat, with enhanced battle shortcuts and voice commands, Mass Effect 3 has found a way of increasing engagement using Kinect, without sacrificing the freedom of movement and exploration common among many of the demonstrated titles. This represents a true step forward for Kinect.

The real world test is, as always, how the voice technology adapts to Brummies and Scots (as Dr Kawashima's brain training famously did not). If the technology works robustly with dialects, maybe even Cheryl Cole can find some small compensation in gaming.

You can support Chris by buying Mass Effect 3