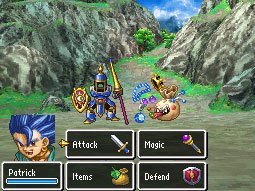 Dragon Quest VI: Realms of Reverie is a perfect piece of classic role play action, with a narrative that sets it apart from the crowd.

On the one hand, Dragon Quest VI: Realms of Reverie (known as Realms of Revelation in the US) seems to be a very by-the-numbers role play adventure. The adventure starts with the solitary young hero in his home town, then moves on to gain companions and grow into a globe-trotting adventure. From that perspective, it's pretty standard JRPG fare.

What sets Dragon Quest VI apart - and what I think sets apart every Dragon Quest game I have played - is the brilliant approach the narrative takes to telling the story. Dragon Quest always seems to a structure which lifts it above the crowd. As a storyteller myself, I can appreciate how equally important it is to frame the story as it is to tell the story.

Inhabitants of Dragon Quest VI are a window into a world populated with families, trysts, hopes, dreams, regrets and secrets.

The game actually opens with the player taking control of a troupe at an advanced point on their journey. The companions all know one-another and are preparing to face their ultimate enemy. However, the battle does not go to plan and the characters become cast away. At which point our hero awakes, alone in his bedroom with only fragmented memories of the visions just seen. As the audience/player, we are given important questions that draw us into the story. Is is a vision? Time travel? Or something deeper?

In fact, the brilliance of the narrative that Dragon Quest VI weaves is that just as the player is given clues to one mystery, another begins to unfold. Its a perfect cycle of suspense and revelation that keeps the story addictive and exciting, as with all the best fiction.

It's a fiction which even wrong-footed me, turning into a far more involved and lengthy adventure than I had expected. I was convinced I was facing the game boss at one point, only to discover that what I had played up to that point was a prelude. The game suddenly opened into a wider adventure with a developmental skills tree for each character and a far deeper mystery than I had guessed. In filmed drama terms, it was as though my entire adventure to that point had been the pre-credits teaser.

The world is such a pleasure to explore, too. Far from filling the world with bystanders that spout random clues or repetitive text, it seems as though every individual met has a relationship with another character or a view on the situation. Talking with the inhabitants of Dragon Quest VI gives a window into a world populated with families, trysts, hopes, dreams, regrets and secrets.

With a well practiced team each battle becomes a satisfying set-piece.

Of course the basis for the story is some of the best role play battling around. At the end of the day it is classic turn-based combat with random encounters; if that isn't to your taste then Dragon Quest VI isn't going to challenge that. As the short story above depicts, the joy of battling in Dragon Quest is the mastery it offers the player. With a well practiced team each battle becomes a satisfying set-piece, with specific approaches for familiar enemy groupings. Rather than becoming stale, it is a testament to the monster and battle design that it always feels fresh and exciting.

The icing on the cake is that Dragon Quest VI looks and sounds fantastic. I wouldn't say it has catchy enough tunes likely to spawn a musical offshoot like Final Fantasy Theatrhythm (3DS), but from the opening bars it is an epic and orchestral treat for the ears, especially for the DS. The graphics are also beautiful with wonderfully constructed towns and environments. I often find myself using the 360-degree rotation just to look for incidental details. If there is a downside it is that the visual design differs very little from each of the other recent DS Dragon Quest titles. It is an unnervingly familiar world.

Every great role play game series has its unique appeal. The thing which always has me returning to Dragon Quest is that the way that even the most conventional fantasy story is told with a unique viewpoint. Whether it's Dragon Quest IV's coup of casting the player as the shopkeeper in the weapon store, or Dragon Quest V's family-spanning lifelong quest - there is always a fresh perspective here which keeps the adventure genuinely exciting.

You can support Chris by buying Dragon Quest VI: Realms of Reverie