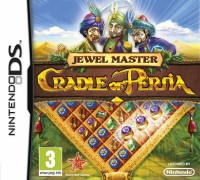 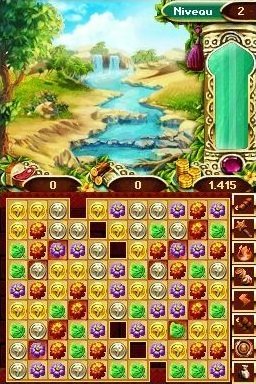 Jewel Master: Cradle of Persia twins the match-three puzzle genre with an empire-building sideline. It also tweaks the genre itself to provide new challenges. The question is, are the changes a strong foundation or a cul-de-sac?

There's no shortage of match-three puzzle games on the market. Like Tetris, it's become a genre staple in itself. With any new title, it's not so much about the gameplay itself, as much as how well it is executed. Also, like Tetris (3DS) there is a trap that needs to be avoided: modifying the basic rules for the sake of innovation and thereby breaking the fun of the game.

Where Jewel Master: Cradle of Persia mostly differs is that the playing space is arranged in different shapes and the aim of each level is to clear the coloured squares by making matches over them. Like any innovative feature in a game, this simple rule change is expanded upon and experimented with throughout the game. This does lead to some interesting and absorbing challenges.

This simple rule change is expanded upon and experimented with throughout the game.

Alongside this is a meta game in which the puzzles which you clear release resources which can be used to build a settlement. This side-game provides structure and progress and will take you from the simplest of desert camps to the great Persian empire. Different types of gems gradually deliver different quantities of resources which adds another, more strategic, layer to the gameplay.

So the question remains as to whether these changes add or detract from the experience. The unusual shape of some of the arenas makes the game more difficult, but this is offset by special moves which allow areas of gems to be cleared with a simple click. This keeps the game fresh and - twinned with the growing civilisation in the meta-game - provides an almost narrative feeling of progression.

In other areas it doesn't work so well. Some levels have such restrictions that it creates a dependency on special moves and forces the player into multiple restarts to hope for a lucky sequence of items. Also, to allow for the oddly-shaped arenas, items no longer fall strictly downwards. Sometime pieces fall at an angle to fill in gaps.

This makes it very hard to predict how pieces will fall. The best examples of the genre make it possible for you to see how pieces will fall from above to create combos. Jewel Master: Cradle of Persia overcomplicates this and will likely rob you of the satisfaction of many combos, simply since you won't have known what was going on until the dust finally settles.

As a match-three game, the focus is very different from others. In other titles, when there are no longer possible matches on the board, that represents Game Over. I've always felt a bit cheated by this, since the pieces which fall into play are out of my control. In Jewel Master: Cradle of Persia, once an impasse is reached the game will start destroying random blocks until a possible match is made available to the player. Whether you like this solution to a genre pitfall is purely a question of taste. I quite like it and it keeps the momentum of the game moving forward as well as shifting the perspective away from extending the length of the round and onto maximising score within the limited time frame.

Ultimately I'd have liked the civilisation meta-game to be more detailed.

Ultimately I'd have liked the civilisation meta-game to be more detailed. It does create some narrative and an almost storytelling structure, which I greatly appreciate in a game. Sadly, though, it lacks the deep strategising and personal choice of the beautiful Triple Town (PC), which successfully blends match-three mechanics with a building game. In Jewel Master: Cradle of Persia, progress feels very linear as though simply unlocking new bits of scenery as each level is cleared. The resources are limited to three separate counters, food, materials and money and while there is some non-linearity in the order in which new buildings are unlocked there is no choice to the placement of these and it just feels like dressing-up a fairly simple puzzle game.

Trying to unlock as much of the city as possible in a few levels provides an additional layer of challenge, but ultimately not as much work has gone into the sub-game as has been lavished upon the match-three mechanic. Puzzle Quest (DS) demonstrated how the match-three element could be a tool within a wider roleplaying experience, but sadly Jewel Master: Cradle of Persia fiddles with the part of the formula which isn't broken. They'd have been better off adding more depth to the city and stripping the complexity out of the gems.

Nevertheless, it's an enjoyable puzzle game and if you don't already have a match-three game that consumes your time, this is a very credible choice.

You can support Chris by buying Jewel Master: Cradle of Persia