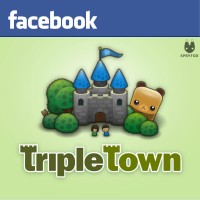 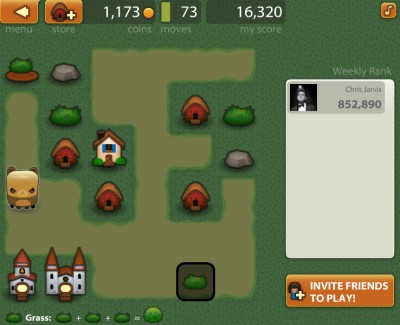 Triple Town stands out from the sea of Facebook games with surprising depth and longevity.

I seldom play Facebook games. Mainly this is because I find they offer some short-term fun, but fail to evolve beyond the simple premise. I also avoid Facebook games as they have a tendency to graffiti my wall with invasive marketing, which neither I nor my friends appreciate.

Triple Town came to me as a recommendation and on the basis that I hadn't been subjected to any spamming of my profile from friends I thought it would be a safe bet to try out. I was glad I did. At first it appeared to be a basic match-three puzzle game but as I progressed, the game progressed with me and I found a strategy title of surprising depth. With gameplay that is part click-fest and part Settlers of Catan, the desire to try to build a bigger and more successful town each time keeps me coming back.

Triple Town is a magical fairy-tale take on the world-building genre.

The premise is that matched sets of pieces combine to create a single tile of increased value with progression from a tuft of grass up to a stone castle and beyond. Pieces for the player to place are random, but generally the lower value the tile, the more regularly it appears. So, most of the game revolves around careful placement of grass and bushes to create combos. It is the position of the last tile to be placed which determines the position of the new upgraded tile, which drives the strategy.

Most match-three puzzle games subject the player to an amount of chance which precludes the game from becoming truly strategic. Bejeweled, for instance, allows the player to plan ahead to an extent but, since there is no controlling the sequence or position of gems which arrive, the length of any game falls largely to chance. In Triple Town, new items are delivered one and a time and can even be substituted into a bank to delay the use of the item to a more opportune time. Combined with the way matched sets then disappear to be replaced by a new structure, the board is continuously being renewed to make way for further gambits.

It's been an interesting title for me to test the water with Facebook games. I've not really played any since the introduction of Facebook credits and it is interesting to see how the landscape has changed. The number of turns in Triple Town a person can play is limited per day. Additional turns can be purchased using coins which are either won in-game or can be bought. There is plenty of scope for a player to play for free each day, but for those who really enjoy the game the temptation to spend a few pence to keep playing will be strong.

Unfortunately, it is the same pool of coins used to purchase additional turns which also purchases in-game items. When struggling with a tight spot it is common to trade gold coins to ensure that the next item will be guaranteed. But, given that it is technically possible to spend money to gain these items, does it not negate the satisfaction of a high score to know that a player's success may have been bought? I have no trouble at all with a title using micro-transactions to unlock more playtime, but to actually alter the outcome of a player's game through payments seems counter to the spirit of play.

To alter the outcome of a player's game through payments seems counter to the spirit of gaming.

It is a tricky issue and possibly one which will get worse before it gets better. With many console games now offering pre-order bonuses of in-game items which can give the player an edge, it seems that we are supporting a gaming culture which allows success to be purchased.

It has a minor impact in this game and is certainly not enough to mar the enjoyment I had with Triple Town. It's a game which inspires my imagination and creates a narrative all of its own, as clusters of houses spring up and rogue bears patrol the streets waiting for the appropriate moment to be corralled. Triple Town is a magical fairy-tale take on the world-building genre and also a discrete and polite visitor to your Facebook profile.

You can support Chris by buying Triple Town