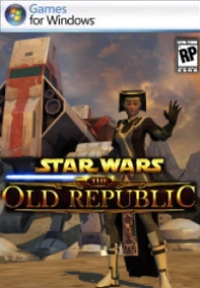 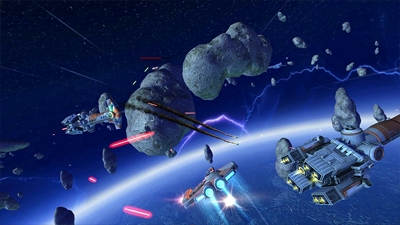 Star Wars: The Old Republic will attempt to balance its rich story with the freedom of choice demanded by an MMO.

I've always kept a bit of a distance from MMOs. While I like the idea of creating my own character, choosing areas to explore and joining raids I find that I miss a well-told story with a traditional beginning, middle and end. All too often it feels as though my character is grinding away and gaining experience to no real end.

There is no moment of personal crisis; no darkness overcome; no cathartic epilogue as I stand amid the sparking ruins of my own nemesis' destroyed stronghold; no heroic stoicism as my... (ed: cut!). Unfortunately, the level of directed storytelling that delivers these narrative moments in games usually comes at the cost of player choice and freedom.

From my recent screening though, Bioware is intending to deliver a giant massively-multiplayer universe in which a personal story can still be played out. While many players are hankering for a sequel to Knights of the Old Republic 2, Bioware insist that not only does Star Wars: The Old Republic represent instalment number 3, it is also parts 4, 5, 6, 7, 8, 9 and more because of the huge number of stories it will set out to tell.

When creating a character, you choose either the light or dark side before delving into classes, such as Jedi or Bounty Hunter. Each permutation of those choices leads to what is effectively a single player story, enacted in the multiplayer arena.

Even within that character's story there is a range of branching moral choices, optional actions and directions which each story can take and lead to a game with a vast amount of content.

Bioware talked about each character's story arc being written as a trilogy (classic Star Wars terminology, of course, but what this delivers is a traditional three-act narrative), hopefully providing each character with background, motivation, development and finally some kind of closure.

Bioware claim that Star Wars: The Old Republic will be the world's first fully voiced MMORPG.

However, this isn't just a single player RPG in a multiplayer environment. In the demo I saw, four players grouped together on a story quest. This meant that during dialogue choices all players voted for their choice and then a behind-the-scenes stat calculation determines which player speaks.

The balance is clearly a tricky one. For example, the demo showed how one player's choice can lead to a story character being either being killed off or saved to return later as a continuing part of the plot. It's not clear how the consistency will be maintained when two player who've made significantly different choices team up.

When I asked how the individual player's choices will be resolved in a group situation, he simply replied that there were a few elements which were still being worked through. Clearly some of the challenges of balancing player choice with group experience have not yet been overcome.

However, it's a dead cert that if anybody can find a solution, it's Bioware. From the Baldur's Gate series, through Neverwinter Nights, Knights of the Old Republic and of course Mass Effect, Bioware have created some of the best role-playing adventures in gaming history. Given their incredible skill with crafting stories consistent with a player-customised character, I may have finally been converted to idea of properly playing an MMO.

As a Star Wars game it also looks and sounds incredible.

As a Star Wars game it also looks and sounds incredible. The worlds are varied and authentic, the player costumes unique and legitimate and the voice acting is of a very high standard. Bioware claim that Star Wars: The Old Republic will be the world's first fully voiced MMORPG.

It's a heavy promise which Bioware have made. If they succeed in delivering it, this could be the most engrossing story-driven multiplayer game created. Not only that but a very exciting proposition for anyone with even a mild Star Wars inclination.

Star Wars: The Old Republic is due for release on the PC later in 2011.

You can support Chris by buying Star Wars: The Old Republic