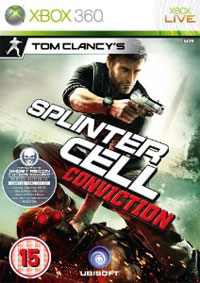 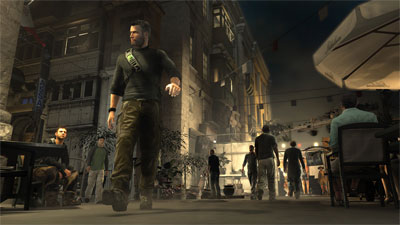 Splinter Cell Conviction's emotional story of how far you can push a man before he breaks, haunted my thoughts during the couple of weeks I played it.

The Splinter Cell series has followed the exploits of Sam Fisher for a decade and he's seen some pretty rough moments. The games themselves have mirrored this with varying quality. Happily though Conviction brings Fisher's harrowing experience together with deft gameplay to create a game that is hard to get out of your head.

Conviction begins with an out of action Sam trying to relax on his holidays when he gets rudely interrupted by an ex-colleague of his (Anna "Grim" Grimsdottir) and a whole squad of people looking to take him down. With Grim's help he bundles through an intense story that dredges up his history in Iraq, his dead daughter and the real truth behind his situation for the last two games.

Straight off you get the feeling that Sam has had enough, which to be fair most people would have by now. The opening tutorial explaining the darkness mechanic is played through a heart wrenching scene where the player must defend Sam's daughter from intruders as their home is attacked.

These contained moments are complemented by free roaming battlefield encounters. A favourite of these for me was when Sam had to fight his way through enemies in a sparse environment which was designed to work against him. Scouting my way forward made me feel genuinely panicked.

The slightest noise made me retreat back into cover.

I was out-numbered on a massive scale with very little cover and every little noise, every slight movement made my finger twitch on the controller. The slightest noise made me retreat back into cover.

This stays with you long after you've stopped playing. But more than these high impact segments, it is the narrative turns that I found most interesting. After this last scene for example, you reach your goal only to discover Fisher tied to a chair, tortured and beaten ready to be rescued by his best friend - you. The sense of disorientation is fascinating as you struggle to remember when characters had been switched on you.

Conviction kept playing with my expectations throughout the game. It was a clever and unsettling approach that made the experience feel more like a Hollywood movie than a videogame.

You are teased through each level with a sparse breadcrumb trail of information. I found my mind straining to put the pieces together even when I wasn't playing, which in turn drove me back to the game to find out what was happening once and for all.

The game had managed to get sufficiently under my skin that the choice felt significant.

The game ends (ed: look away now if you haven't played it) by offering you an unavoidable choice - kill or free Tom Reed, the catalyst for Sam's descent into rage. I found myself unable to make the choice, finger poised over the button ready to shoot him but at the same time not sure if that's how I wanted it to end.

(ed: you can look back now) The game had managed to get sufficiently under my skin that the choice felt significant. I felt a little silly that a videogame was making me pause for thought. But this was an experience I had lived with for not a few hours, and I now realised had become an important story for me.

You can support Dom by buying Splinter Cell Conviction