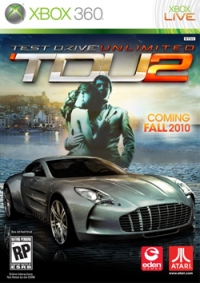 Other GamePeople columnists have reviewed this from their perspective - huh?:
Tech Gamer (360)
Reporting Gamer (360) 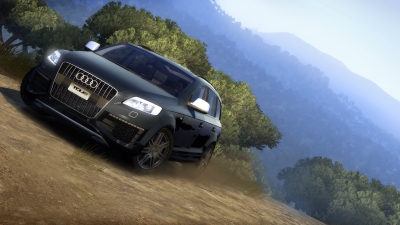 Test Drive Unlimited 2 is filled with features as my recent hands-on session made clear. The headline though is the online social experience. The game is always online with hundreds of players in the world to race.

The world is constantly populating with challenges. Simply flash your lights at a stranger and you trigger an event. This informal approach to racing, along with more formal race invites as well as side-bets, finally delivers the promises made about fluid gameplay.

Interaction with others isn't limited to the road. You can also buy properties within the environment that can be decorated and visited by friends. This provides a perfect setting to show off the cars you have collected.

Split between Ibiza (the area I got to see) and Oahu over 3000km of track has been modelled on each island's real roads. Using the in game GPS makes this all the more impressive, allowing you to see interactive areas, such as car show rooms, and sections of the map populated by other racers.

With so much on offer it could be easy to lose focus of the main objectives, but the ultimate goal of the game is as diverse as the gameplay. The main rags to riches story is pretty forgettable, but this doesn't really matter.

The game soon turns from pure racer to a massively multiplayer type experience.

The game soon turns from pure racer to a massively multiplayer type experience as you rush to reach level sixty. Four key mechanics allow advancement; exploration (discovering the entire island), collection (obtaining cars, accessories and properties), completion (finishing races and challenges) and social (racing others and making friends). Test Drive Unlimited 2 encourages engagement in every aspect of the game before allowing you to decide which play style suits you.

Perhaps the most important part of Test Drive Unlimited 2 is the driving. With numerous cars carefully modelled on their real world counterparts, I was eager to get on the road. A balance of racing around real circuits with a dash of arcade flair, it was this that caught my eye. Feeling like a mix of Project Gotham tracks and Burnout Paradise's open world I could see how it could suck me in.

In theory I really don't care about the social elements, the throw away story, buying properties or the hours of music. But watching a Mustang explore real roads, with a good blend of simulation and arcade racing, Test Drive Unlimited 2 starts to shine.

The clever thing is that different people will enjoy different elements of the game. This really is one of the mostly diverse (and ambitious) racing games I've seen in recent years.


You can support Jon by buying Test Drive Unlimited 2